WASHINGTON DC - Days after the conclusion of Reggae Sumfest in Montego Bay, Washington DC is slated to come alive with the staging of the second annual DC World Reggae Festival to be held at the RFK Festival grounds on the 20th and 21st August 2022. 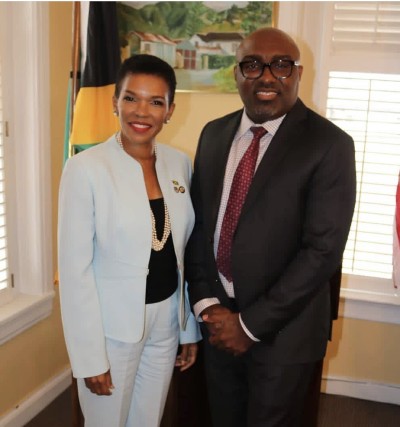 Jamaica’s Ambassador to Washington, Her Excellency Audrey Marks shears a light moment with Pumpstation Entertainment Manager Omar Stephenson of one organizer of the DC World Reggae Festival at its first launch at the embassy of Jamaica. (Photo by Derrick Scott)The two-day festival being staged by Top Tier Management Group in partnership with Pumpstation Entertainment, will celebrate and honor Jamaica’s 60th anniversary of independence.

The event is scheduled to be launched by Jamaica’s Ambassador to Washington, Her Excellency Audrey Marks, on the 19th of August at the Embassy of Jamaica, which has endorsed the festival and which will form part of the activities to celebrate Jamaica’s 60th anniversary throughout the DMV, which comprises the District of Columbia, Maryland and Virginia.

Event organizers Omar Stephenson and Hector Carter, say the DC World Reggae Festival is a family-friendly event that promotes “world peace” with this year’s theme “Let there be Peace on Earth” covering the topics of love, unity, spiritual rejuvenation, and health awareness. According to promoters Stephenson and Carter, the event will include a kid zone, two stages, and local vendors.

The festival which blossomed from 'Caribbean Live' at The Howard Theatre in Washington DC will cater not only to Jamaicans but also extends to Caribbean, African and Urban audiences.

In commenting on the origins of the festival, Stephenson reminisced that “the DC World Reggae Festival has been a dream of mine for many years. To see the growth and acceptance of the community is heartwarming. I aim to give the greater community a taste of Caribbean music and emphasize our call for unity and peace.

“DC is a city that attracts so many from around the world and this festival will embody the essence of our Caribbean culture. We are an infectious people! To do this while celebrating Jamaica’s 60th Independence Anniversary brings me and my team so much joy” organizer Omar Stephenson said.

“On August 20-21, DC will experience Caribbean greatness. We have curated a unique experience that we believe displays our talent and culture. “We want to thank all of our supporters over the years and we look forward to celebrating with the community at the DC World Reggae Festival,” says co-organizer Hector Carter.

In welcoming the staging of the World Reggae Festival for yet another year, Jamaica's Ambassador to the United States, Audrey Marks, commended the team for conceptualizing the festival. She described the initiative as a great way to promote Jamaica as a country, as well as its music and culture. "If you think about it, we are all ambassadors of our country - especially its culture - which has so influenced the world stage that people are constantly amazed at our geographic size," she said.

Ambassador Marks emphasized that it was time for Jamaicans living in the diaspora to monetize the country's culture, food, music and dance. "Our music, fashion and our film industry have tremendous potential," said Marks.

She stressed that it was time to use the creative industry to transform Jamaica's unique resiliency, creativity and commitment to turn the best of the culture into real economic opportunities, given that Brand Jamaica is globally recognized. The DC World Reggae Festival is actually one of the few reggae festivals worldwide that is owned and produced by Jamaicans.

"I was very excited to see this initiative by a small team of four young Jamaicans forming a self-funded group, and want it to be a success to encourage more of this type of cultural entrepreneurship, in addition to providing support for big ideas in the diaspora community to monetize Brand Jamaica," she added.

Marks sees Washington, DC's, intense interest in Jamaican popular music as an opportunity that has not been fully explored; so much so that the embassy has committed to continue its partnership with the festival for future staging’s. "The DC World Reggae Festival demonstrates at a micro level the power of Brand Jamaica. The show is designed to promote Jamaican music - reggae music, Jamaica's culture, and the influence that reggae music has on other cultures," she said.

"Events like the DC World Reggae Festival can only help to propel future interests in traveling to Jamaica for the true authentic flavor of its music, food, arts, culture and interaction with our people." "We have one of the most recognizable brands in the world because of what has been done on the world stage by our musicians, athletes, tourism pioneers, so I would like to see more Jamaicans benefiting from monetizing our brand."

Marks said that the festival "provided a platform for Jamaican brands to market their products, have patrons taste their products and develop a loyalty to the brand because of its support in promoting our culture abroad."

"I am encouraging Jamaican companies that are looking to market themselves overseas to partner with promoters of these types of high-level events because it's a win-win partnership," Ambassador Marks concluded.

She said the embassy has also committed its support to help build awareness of several other events that are raising funds for schools and clinics as well as other charities across Jamaica.