Celebrating the 112th Anniversary of the Birth of Kenneth Hill

The Ministry of Culture, Gender, Entertainment and Sport celebrated the 112th anniversary of the birth of political stalwart and trade unionist Kenneth ‘Ken’ Hill with a wreath laying exercise at his tomb at the National Heroes Park yesterday. 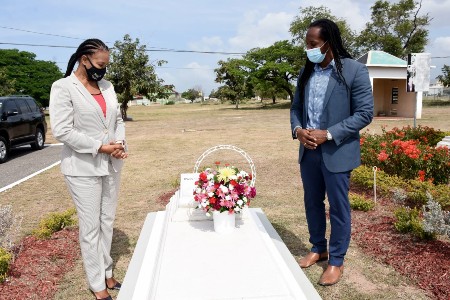 Ken Hill began public life in the 1930s as a journalist for the Daily Gleaner newspaper. In 1937 Hill founded the nationalist organization, the National Reform Association (NRA). The NRA was a precursor to the early trade unions and most notably to Jamaica's first modern political party, the Peoples National Party (PNP), which was founded in 1938. Hill was also a vice president of the Bustamante Industrial Trade Union (led by Sir Alexander Bustamante) but resigned in 1939 to become secretary of the Tramway, Transport, and General Workers Union, affiliated with the Trade Union Council.

Hill became a member of the Bustamante-led JLP after 1955 and was a candidate of the party's federal alliance, the West Indies Democratic Labour Party, for which he won a seat in the federal parliament in 1958 and of which he remained a member until the dissolution of the federation in 1962.