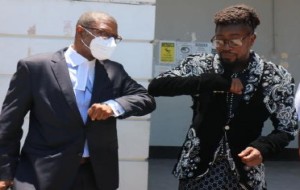 Dancehall entertainer, Beenie Man (right), with his attorney Roderick Gordon after his court appearance (Jamaica Observer newspaper Photo)The singer had pleaded guilty to the offence on April 19 and appeared in the St Elizabeth Parish Court where the fine or three months in jail was imposed.

““Beenie Man pleaded guilty because he wanted to take a responsible approach given that he is an elder of the global music community,” his attorney Roderick Gordon had said in April.

The 47-year-old entertainer had been charged by police last December after hosting an illegal party at a location in Shrewsbury district, St Elizabeth, on November 29, 2020.

The DRMA is used as among the measures here to curb the spread of the coronavirus (COVID-19) that has so far killed 863 people while infecting 47,396, since the first case was detected in March last year.