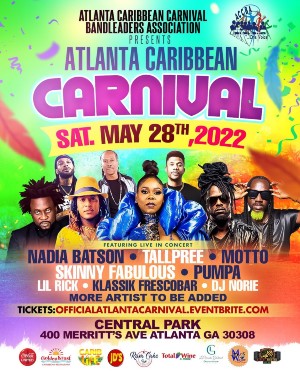 Atlanta Caribbean Carnival’ which has been in existence for 35 years takes place from May 27th-30th 2022 and is already gearing up to be a major highlight of the Memorial Day Weekend (the unofficial start of the US Summer festival season).

With all of the buzz following last October’s Miami Carnival, online communities of international carnival enthusiasts have been referring to the upcoming ATL extravaganza as ‘The Next Great North-American Carnival Experience’ on the calendar.

The event’s organizers have put all of their energies into curating an unforgettable holiday weekend affair. Attendees can expect lively fetes, J’ouvert, a wide array of cross-cultural food vendors, a beautiful display of costumes (inclusive of Carnival Queens) at the parade and an unmatched line-up of the region’s top performers onstage at the Atlanta Carnival festival village.

During 2022’s Atlanta Caribbean Carnival, Skinny Fabulous will also be honored with a proclamation by the city of Atlanta and will serve as Grand Marshall at this year's parade.

Regarding the importance of hosting the upcoming festival within the metropolitan area of downtown Atlanta, ACCBA President Patricia Henry shared, ‘It is very important to showcase the culture in mainstream settings where persons from various backgrounds can observe and embrace it. We want folks to come out and see what the Caribbean has to offer so the festival can be a platform for encouraging tourism for the entire region.’

The famous annual downtown Atlanta tradition has previously attracted celebrities such as stars from the Love & Hip Hop and Real Housewives TV show franchises and will this year feature the participation of Jamaican Reggae singer, actress, model, and brand ambassador D’Angel. 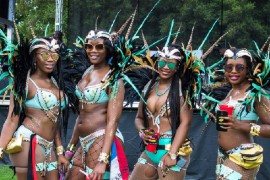 Most notably, the 2022 festival will support the efforts of charitable organization ‘Blessed Hands Generous Hearts’.

The overall mission of the ACCBA is for the city to have one major, truly united Carnival celebration and to continually use the festival to promote respect and equality for Atlanta’s Caribbean community.

The 35th edition of the festival will feature an unmatched line-up of the region’s top performers onstage at the Atlanta Carnival festival village.