An Anthem of Freedom for Cuba, “Patria y Vida” Celebrates its First Anniversary

Miami, Florida - The song that became a cry of freedom for Cuba, "Patria y Vida," celebrates its first anniversary—hitting the peak of musical success after obtaining two Latin Grammys, although seeing how Castro’s tyranny prevails. 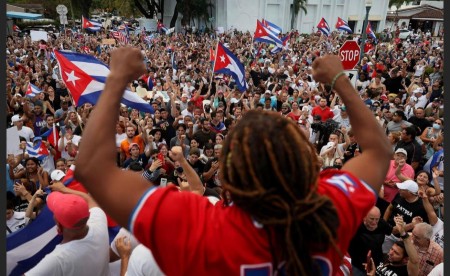 “Patria y Vida is the only song in the contemporary Latin repertoire that managed to raise the voice of a population” Leila Cobo, Executive Director for Latin content and programming of Billboard magazine, could not have said it better. One year after the premiere of this powerful song written by Beatriz Luengo, Yotuel, Descemer Bueno, El Funky, Gente de Zona, Yandam González, and Maykel Osorbo; The clamor of “Patria y Vida” will make history.

The composition has made it to the headlines of the most important newspapers in the world, withstanding conventional marketing strategies with two freestyle rappers from the Island who did not even reach 1,000 followers on social media at that moment, and the support of a town that used the song as a motto and instrument of battle. It has become a symbol of human rights and the leading anthem of the Cuba that begs for freedom.

Yotuel, movement leader, was received by Presidents of different countries. The song has been registered in the United States Congress to remain in history along with the most important speeches that have driven nations, such as the one made by the iconic Martin Luther King.

With more than 350 million hashtags on TikTok, “Patria y Vida is a movement of the people and for the people that will not stop until Cuba is free and the barbarities that our people experience every day are heard. Like the prisoners who protested on July 11th or the unfair imprisonment of Luis Manuel Otero Alcántara and Maykel Osorbo, who is the only musician who has won 2 Grammys and is in jail for that song,” says Yotuel Romero.

Beatriz Luengo, one of the “Patria y Vida” composers, says, “We’ve been working on a documentary about the story of this song and how this movement started.”

Meanwhile, the theme continues to accumulate millions of views on digital platforms. Currently, it has more than 10 million views on YouTube.