2021 Festival Song Finalists to Go Head to Head in Live Showcase on TVJ This Thursday, July 15

The top 12 finalists of the 2021 Jamaica Festival Song Competition will go head to head in front of the nationon TVJ, this Thursday, July 15at the competition’s virtual Presentation Show, beginning at 8:30 p.m. The finalist will try to out-sing and out-perform each other with their vibrant and patriotic Festival Songs, as they vie for public votes on their mission to becoming Jamaica’s next Festival Song Winner. 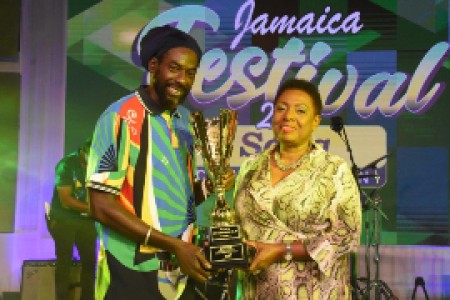 2020 Jamaica Festival Song Winner, Buju Banton receives his winning trophy from the Hon. Olivia Grange, Minister of Culture, Gender, Entertainment and Sport at the Competition’s televised grand final last July.The Presentation Show, which is the first of two live shows that will be used to determine the 2021 Competition’s ultimate winner, will also be live-streamed on the Jamaica Cultural Development Commission’s (JCDC) website – www.jcdc.gov.jm and on its Facebook - Jamaica Cultural Development Commission, Youtube - JCDC Jamaica1 pages.

The show, which promises to be a “flag-waving good time” according to the Hon. Olivia Grange, Minister of Culture, Gender, Entertainment and Sport, will also be hosted by renowned Jamaican comedian and “Mr. Festival” ambassador Christopher Johnny Daley.

“The Festival Song competition is charged with finding a unifying and patriotic song that encapsulates the Independence spirit, and will drive Jamaicans across the world to celebrate the black, green and gold with pride; and there is no doubt that all of this year’s 12 Festival songs will do just that. The songs cover every genre of Jamaican music, from the classic Mento, to Reggae, Dancehall and even Ska and Rocksteady, and each and every one carries its own body-rocking, feel-good flavour,” Minister Grange said.

“We want Jamaicans both at home and abroad to tune in this Thursday at 8:30 pm to see the top 12 finalists give their all during their live performance of their Festival Song. The show promises to be a flag-waving good time, and as we head into this year’s Independence Festival celebrations we want every Jamaican to carry their own favourite Festival Song with them into the season,”the Culture Minister continued.

Grange also noted that the competition’s finalists are an effervescent mix of both upcoming and established artistes, each with their own sound and flavour, which may make it difficult for the public to choose and vote for just one favourite.

“Voting lines will open immediately after the performance show, so we want the public to take their support of the next level by calling and texting to vote for their favourite finalist ahead of the competition’s Grand Final announcement show on July 22. If you’ve heard your winning Festival Song, a song that speaks to you, moves you and grooves you and makes you proud to be a Jamaican, then you need to vote to ensure that it remains in the running to become Jamaica’s next Festival song” Grange added, noting that all 12 songs are already available for public listening through the international music platforms:Apple Music, Amazon Music, Tidal, Deezer, Youtube Music and Spotify, while snippets of the songs can also be found on the JCDC’s website.

The 2021 Festival Song Finalists and their songs are:

The 2021 Jamaica Festival Song Competition will culminate with a televised Grand Final on Thursday, July 22. This competition is sponsored by the CHASE Fund, Digicel, Shirley, Radio Jamaica/ TVJ and the Jamaica Observer.