UWI to Give Financial Support to More Than 1,000 Vincentian Students

KINGSTON, Jamaica – The University of the West Indies (UWI) has formulated a financial aid strategy for new and returning Vincentian students as a form of support for the volcano-hit island. 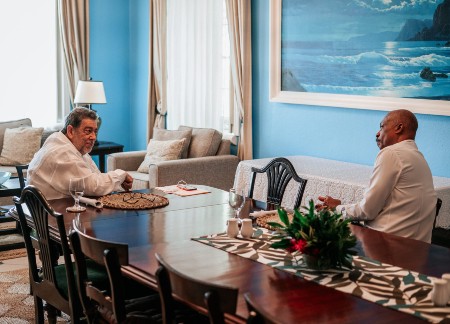 A statement from The UWI’s regional headquarters here said that “in August this year, Vincentian students on all campuses will receive a special provision of tuition and accommodation assistance for the academic year 2021/2022 of up to 50 per cent, based on each campus’ capacity and students’ individual needs”.

“Vice-Chancellor Beckles also identified that 30 per cent of the proceeds from the New York and Toronto fundraising galas would be earmarked to provide specific financial support for students from Saint Vincent and the Grenadines,” it added.

Sir Hilary described the initiative as part of The UWI’s overall monitoring and management of the affairs of students from the islands; those pursuing education online, from their homes; and those who will be returning to various landed campuses; and the new, incoming generation of students.

In his dialogue with Prime Minister Gonsalves, he also pledged The UWI’s continued support in the management of the volcanic/seismic activity at the La Soufriere volcano which began erupting explosively in April but has been quieter since earlier this month.

To date, The UWI has provided a range of support including scientific support, mobilizing relief and financial resources towards health care, education and for students displaced by the eruptions.

Sir Hilary also took the opportunity to congratulate the tremendous work of The UWI Seismic Research Centre team on the islands since December 2020, and the relief support team coordinated by Dr. Francis Severin, Deputy Principal of The UWI Open Campus.

He said the financial and material relief support through the “Rally Round SVG” initiative has amassed significant aid to the country already.

Turning attention to the islands’ recovery, Sir Hilary pledged his personal support to the Government of St Vincent and the Grenadines in negotiation and diplomacy with international agencies under the rubric of the Sustainable Development Goals (SDGs) in order to enable the country to get back on its feet after being knocked off its targeted development goals as a result of this seismic crisis.

Prime Minister Gonsalves, himself a UWI alumnus and former lecturer, conveyed his satisfaction with the efforts of The UWI, and expressed gratitude on behalf of the nation.