KINGSTON, Jamaica - The University of the West Indies (UWI) has appointed Professor Rose-Marie Belle Antoine as the new Pro Vice-Chancellor of the Board for Graduate Studies and Research (BGSR). 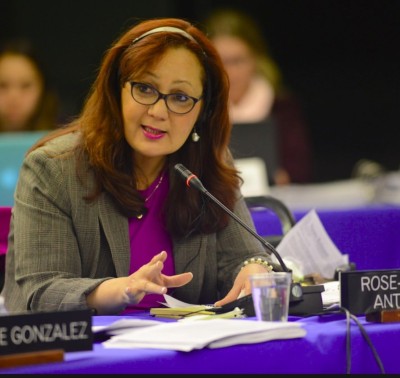 Professor Rose-Marie Belle AntoineIt said that Professor Antoine, who has recently completed two terms as the first Dean, Faculty of Law at the St. Augustine campus in Trinidad, now heads the University’s Board for Graduate Studies and Research, to oversee its policy and operational plans for development and regulation.

The portfolio also includes management of administration, funding as well as monitoring and evaluation of graduate education and research throughout the regional UWI system.

Professor Antoine is a Cambridge and Oxford scholar, holding a doctorate from Oxford University in Offshore Financial Law. She is a long-serving member of the UWI, dating back to 1989 when she was a temporary lecturer at the Cave Hill campus in Barbados.

She was the inaugural director and initiator of the Master of Law (LLM) program, UWI’s first regional, hybrid delivery program, launched in 2002.

Professor Antoine has received numerous accolades and prizes regionally and internationally including the UWI Vice-Chancellor’s Award for Excellence in Research in 2006 and 2013, being the only individual to have won the award twice.

In 2011, she was elected by Organization of American States (OAS) as a Commissioner at the Inter-American Commission on Human Rights, and in 2014 elected President, the first person from Trinidad and Tobago. She was OAS’s Head of the Economic, Social, and Cultural Rights Unit, appointed Rapporteur for Persons of African Descent and Against Discrimination and Rapporteur of Indigenous Peoples.

Antoine is a Commonwealth Scholar, Cambridge Pegasus Fellow and in 2021 she was identified as a Caribbean Court of Justice (CCJ)’s Pioneering Caribbean Women Eminent Jurist Awardee. She has been part of select research teams at some of the world’s most prestigious universities, such as Oxford and McGill and served as temporary Eastern Caribbean Court of Appeal judge. She was made Honorary Member of the international Society of Trust and Estate Practitioners, UK, a status granted to “those who have made a unique and exceptional contribution” to the field.

“As lead consultant to all of the governments in the Caribbean, UK, USA and Canada, the judiciary and several international organizations, including the EU, OAS, IADB, World Bank, CARICOM, UNDP, UNICEF, ILO, UNIFEM, CAREC, ECLAC, PANCAP, UNAIDS and UNDCP, she has drafted legislation, led international teams and authored influential Policy Reports on several varied key issues.

The UWI said that Professor Antoine, who has an impressive publication output will serve in her new post for a three-year term.