KINGSTON, Jamaica – The Chancellor of the University of the West Indies (UWI), Robert Bermudez, Friday expressed disappointment at the level of discourse that followed the report of the Chancellor’s Commission on Governance, but urged the regional tertiary institution to step up its contribution to Caribbean society. 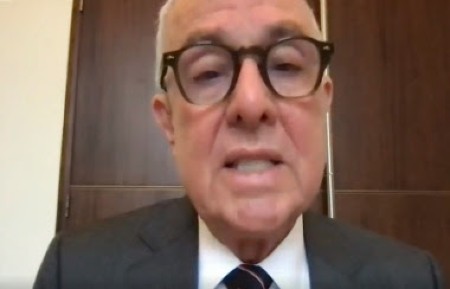 Chancellor of the University of the West Indies, Robert Bermudez addressing the Business Meeting of the UWI Council (CMC Photo)“This is not a time for division, but the time for proving the substance of our worth to the students who come to us in trust and the people of the region who keep investing in us,” said Bermudez, the sixth Chancellor of the UWI.

Bermudez, addressing the annual Business Meeting of the University Council said that the “great vigor and substance” report of the Commission that was chaired by the former president of the Caribbean Court of Justice (CCJ), Sir Dennis Byron, submitted in July 2020, had been accepted and approved for implementation in at a special meeting of the UWI Council March this year.

“I have no doubt that it will stand the test of time,” he said.

Bermudez, a Trinidadian business executive, said that the previous review of the UWI governance structure had been undertaken in 2006, when some aspects of technology did not exist and social media was in its infancy.

“I put all this in context to emphasize how much the world has changed and the extent to which the governance structure of institutions have had to adapt to accommodate today’s demands for accountability transparency and equity”.

He said UWI came into existence out of the University of London and was established as a colonial institution. He said 74 years later “many of the legacies of the university come from its colonial foundations”.

He said the fact that the great majority of the contributing countries to UWI are independent nations bring these legacies into question.

“As many of you would be aware this mis-alignment between the UWI’s antiquated colonial structure and its modern mandate to prepare and equip our students for their roles as citizens in participatory democracies with the capacity to contribute to the viability of our islands, our region and the world, has been a source of dysfunction”.

The Chancellor said the governance report “which addressed this problem engendered much public comment both within the walls of the university and beyond as it should.

“Its quality and depth gave the people of our 17 contributing countries and territories a solid base for understanding the challenges faced by the UWI and the opportunities to participate in a regional conversation about their university’s future and the options before it”.

The report of the Commission had become a major talking point within the region, with at least one prominent Caribbean diplomat, Sir Ronald Sanders, writing in his weekly media column that “tales have circulated of the dissatisfaction of the Vice-Chancellor, Sir Hilary Beckles. There has even been an unsubstantiated and disgraceful suggestion of racist motivation by the Chancellor, Robert Bermudez.

Sanders noted that the qualifications of the Commission members for carrying out the mission are beyond question.

“Additionally, in the course of their work, they carried out a governance survey across four campuses of The UWI, involving students, staff and external stakeholder,” he said, adding “the Commission made various recommendations for improving the governance of the university.

“In none of the recommendations did the Commission denigrate the role of the Vice-Chancellor or promote a greater role for the Chancellor.”

Earlier this year, the UWI Mona had expressed “deep concern” regarding the leaked report pertaining to an inquiry by an independent review committee that examined aspects of its human resource framework.

The Sunday Gleaner newspaper had reported that the Vice-Chancellor had established the six-member committee to investigate the process involved in the renewal of his contract, an action that was viewed as tantamount to a subordinate investigating his boss.

The Gleaner reported that the committee provided seven major conclusions and more than a dozen major findings in the nearly 200-page report. It said a procedure established in 2006 for the reappointment of vice-chancellors “was not followed” in the renewal of Beckles’ contract for a second six-year term.

In January, the UWI sought to downplay reports of a rift between Bermudez and Beckles, that the media said had entered “unprecedented and “dangerous” territories”.

In his address to the Business Meeting of the University Council,  Bermudez said as a publicly funded institution, the people of the region are its ultimate stakeholders “whether or not they ever enrolled.

He said five years ago, when he took up the position as Chancellor he had looked “forward with great enthusiasm to doing my small part to promote open and frank dialogue on institutional transformation based on values of transparency, accountability equity and of course academic freedom.

“I came expecting a place of intellectual fire and idealism, committed to changing the world. The quick resort to knee jerk name calling in a matter that demanded an ability to sustain vigorous debate was surprising.

“I chalk it up to experience which always comes with the benefit of new knowledge. Whatever our differences we stand today with the shared assignment to bring the value of the UWI to the service of our students and their efforts to resolve the many urgent problems confronting the region,” Bermudez added.

He said UWI can take pride in having assisted regional governments in dealing with the COVID-19 pandemic and maintaining the operations of the regional university.

But he warned that other challenges are on the horizon, including climate change, increasing poverty and unemployment, youth alienation and the widening income gap as well as geopolitical uncertainty.

He said these issues will force to UWI to re-think its teachings “and step up its contribution to Caribbean society.