UNITED NATIONS – The United Nations says that rising gang crime in Haiti’s capital, Port-au-Prince, is limiting access to education and is preventing thousands of children from going to school. 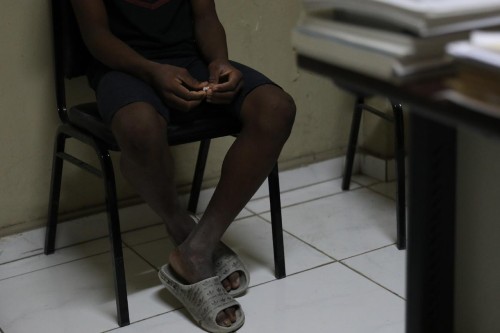 Photo credit: © UNICEF Haiti/Ndiaga SeckIn a statement on Sunday, the world body said that since 2020,  gang-related violence in the French speaking CARICOM member state has led to school closures, and that children have become “easy prey for gang recruitment.”

The UN said Steve (not his real name) dreamed of becoming a schoolteacher when his life was turned “upside down” last year.

Due to the upsurge in gang-related violence in his neighborhood, the UN said his school was closed, and the 15-year-old found himself roaming around on the streets, at the mercy of armed groups.

“I joined the gang in February 2021. They saw me walking and called me and asked me to work for them,” the UN quoted Steve as saying “There were other children like me.”

According to a report published by two local youth-focused organizations, 13 per cent of the children surveyed in one troubled neighborhood in Port-au-Prince say they have been in direct or indirect contact with members of armed gangs as they tried to recruit them.

The UN said they offer to pay the children a lot of money, while threatening to kill them if they don’t comply.

In 2021, the UN said clashes between rival armed gangs erupted in some urban areas of Port-au-Prince.

The UN said more than 19,000 people including 15,000 women and children have been forced to flee their homes due to acts of violence such as killings, kidnappings; hundreds of houses have been burned or damaged.

This year, the gang war has intensified and since April 24, half a million children have lost access to education in Port-au-Prince, where some 1,700 schools are closed, according to government figures.

The UN said Steve led a peaceful life as a suburban child. He played with his younger brother and two younger sisters, and thoroughly enjoyed his childhood with his grandmother.

“I used to ride my bike, play video games and watch movies until dark,” Steve recalled. “Sometimes, I went to fetch water for my grandmother, and I also cleaned the house.”

The violence is reportedly impacting an increasing number of schools and has shattered the dream of many children.

An education ministry assessment between April and May 2022 of 859 schools in Port-au-Prince revealed that 31 per cent of had been attacked, and over 50 had closed their doors to students, the UN said.

It said a large number of schools have been occupied by gangs or are serving as temporary accommodation for families displaced by violence.

The UN said the number of students in classes has fallen from 238,000 at the start of the gang crisis in April to 184,000 and violence, school closures and idleness “lead inexorably to the enrollment of children into armed groups.”

“There are always shootings where I live and often people cannot get out,” Steve said. “The schools are closed, and we are all abandoned in the streets. When you live on the street, you become a street child, and that’s what gets us into gangs.”

“Giving children weapons to fight and using them as soldiers or spies is a violation to their child rights and condemned by both national and international laws,” says Bruno Maes, the United Nations Children’s Fund (UNICEF) Representative in Haiti.

“It saddens me that children who are willing to learn and teachers willing to educate cannot do so because they feel unsafe,” he added. “Children must be able to attend school safely, play freely and enjoy being a child and given a chance to develop to their fullest potential.”

The UN said Steve has now been caught and is awaiting trial on charges related to his gang activity.

While in detention, the UN said he is being helped by the UNICEF-supported Brigade for the Protection of Minors (BPM).

In 2021, the UN said more than 95 per cent of incarcerated children in Haiti were in prolonged pretrial detention.

The UN said BPM is working to ensure that he can benefit from laws that will ensure a timely judicial process.

To date, UNICEF has supported the creation of juvenile courts in West, South and North Departments in Haiti.