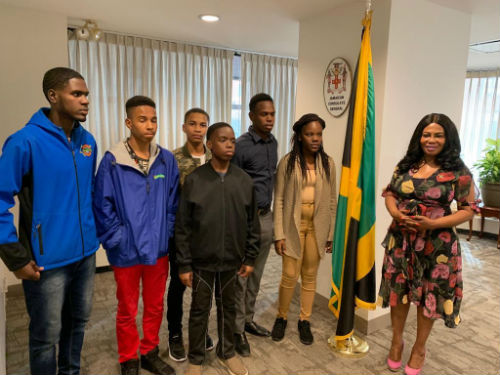 St Jago team members made courtesy call on Counsel General of Jamaica in NY, Alsion Roach-WilsonThe whirlwind cultural and academic exchange included an official visit to the Jamaican Consulate General in Manhattan, where the team and coaches met newly installed Counsel General of Jamaica in NY, Alsion Roach-Wilson. The team also paid a courtesy visit to Ann-Marie Grant at the American Foundation of the University of The West Indies (AFUWI) and the NY offices of JAMPRO. The championship winning delegation which included team captain Chanarie Lindsay, Abigail Barnes, Joel Henriques, Leroy Cassanova and Chadrick Thompson and team coaches Mark Clarke and Romeo Lee were feted by the St Jago Alumni Association NY Chapter at a reception in their honor at the Door Restaurant in Queens. In Brooklyn, the team participated in an inspiring discussion with Principal Dr. Eric Blake at the Star High School, himself a former English teacher and coach of the Quiz team at St. Jago before journeying to Jamaican owned Maimonides Women’s Center where they met Dr. Millicent Comrie.

Other significant features of the tour included visits to CBS Radio Studios and The Sony Music Hall in Manhattan where they were entertained by the world renown Harlem Choir, followed by Sunday brunch, prepared by Jamaican celebrity Chef Patrick Simpson. The team also enjoyed the popular 'Big Bus Tour' around the NYC and went to VP Records at Green Acres Mall in Long Island. Another highlight of the tour was a visit to the Irie Jam Media studios in Queens, where the delegation met singer Richie Stephens and radio jocks Dubb Master Chris and DJ Roy.

"We were only too happy when TVJ invited us to partner on this project, as any occasion to recognize the achievements, resilience, tenacity, perseverance and success of our young people presents an opportunity for us to honor them. We look forward to being able to participate in other such initiatives” said Louis Grant, Executive VP of Irie Jam Media.

This is only the second time that the competition has extended overseas travel as part of the winning Grand Prize package. Ironically the other occasion being in 2009 when then winners St. Jago High School, journeyed to the Bahamas.

“The lifelong benefits of this experience far outweigh the monetary costs. The world of possibilities that await them appear now to be more than just dreams, but are at their fingertips – reachable, touchable, palpable, achievable” said Claire Grant, General Manager of TVJ.

Team Captain Chanarie Lindsay, one of two team members now studying at the University of the West Indies (UWI), said he was grateful for the opportunity to visit New York.

"On behalf of the 2019 St. Jago High School quiz team and especially in this 275th year since our founding, I express my whole hearted gratitude for the opportunity availed to us to travel overseas for the first time, meet members of the St. Jago Alumni and be exposed to the wider Jamaica diaspora community who have kept the flag flying high. We have come from this experience resolute that we will do our utmost to make all proud of us" he stated.

The group stayed at the NY Hilton Towers in mid-town Manhattan. Michael Gonzalez of Television Jamaica was the team chaperone.