Human Rights Day is observed every year on December 10, the day the United Nations General Assembly adopted the Universal Declaration of Human Rights (UDHR) in 1948.  The UDHR, which proclaims the inalienable rights of all people, consists of a preamble and 30 articles that set out a broad range of fundamental human rights and freedoms for all people. It guarantees our rights without distinction of nationality, place of residence, gender, national or ethnic origin, religion, language or any other status. This year marks the UDHR’s 73rd anniversary. 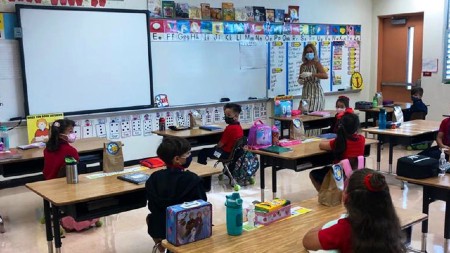 Drafted by representatives of all regions and legal traditions, the UDHR has, over time, been accepted as a contract between governments and their people. It serves as the foundation for an expanding human rights protection system that today focuses also on vulnerable groups such as persons with disabilities, indigenous peoples and migrants.

Miami-Dade County Public Schools’ (M-DCPS) Department of Social Sciences, in collaboration with International Solidarity for Human Rights, is promoting District-wide recognition of this important milestone in human history. M-DCPS provides opportunities for students to learn about the UDHR and the rights guaranteed to people of all nations. The District also conducts an annual reading of the of the Declaration.  Curricular connections are also made to the UDHR to similar rights as stated and guaranteed by the U.S. Constitution. Historical connections are made in multiple classes given the fact that the U.S.'s own former first lady, Eleanor Roosevelt, was heavily involved in civil rights and social activism.  She served as the chair of the UN Commission on Human Rights, which drafted the UDHR.

This year’s Human Rights Day theme relates to 'Equality' and Article 1: All human beings are born free and equal in dignity and rights.  The principles of equality and non-discrimination are at the heart of human rights. They are aligned with the United Nations approach to addressing and finding solutions for deep-rooted forms of discrimination that have affected the most vulnerable people in societies.

M-DCPS also created a PowerPoint presentation, which provides instructors with background information and a slide on each of the 30 rights.  Available in more than 500 languages, it is the most translated document in the world.

Human rights education empowers students with learning they can use far beyond the classroom – in fact, they will take it into their homes and beyond into the wider community. The lessons of respect and tolerance will help students create a healthier, happier, equitable culture and could lead to reductions in bullying and other negative behavior, improving attainment and aspirations.