Miami, – Miami Dade College (MDC) honored ten alumni on the frontlines of the pandemic response and recovery during a special Heroes Edition of the MDC Alumni Hall of Fame. The annual event generated more than $1.2 million to support scholarships for current and future MDC students. The socially distanced awards ceremony was held at MDC Wolfson Campus and livestreamed. A recording of the event can be viewed at mdc.edu/livestream. View photos on the MDC Alumni Facebook page. 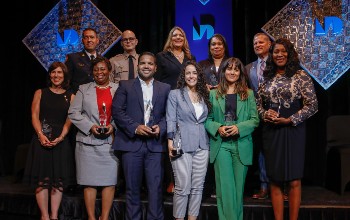 The Miami Dade College Alumni Hall of Fame celebrates the achievements of outstanding MDC alumni who are the civic and business leaders of our community, while raising essential funds to support student scholarships for the next generation of Miami’s leaders. Since 2003, the Hall of Fame has inducted nearly 400 distinguished alumni.

The 2021 MDC Alumni Hall of Fame Heroes Edition inductees are:

Teresa Ellen Murphy, who was named Miami-Dade County Public Schools’ 2022 Francisco R. Walker Teacher of the Year, got her start at Miami Dade College. During a year unlike any other, the 27-year veteran teacher found herself teaching a new grade level – 4th grade – virtually, amid a global pandemic and while going through chemotherapy. Teaching is a lifelong passion for Murphy, who believes that students must take ownership of their learning to reach their full potential. She wants to impact students’ lives in such a way that 20 years later, they return grateful for the kindness, understanding and special attention they received.

Pete Gomez is one of two incident commanders at the COVID-19 testing site at Florida International University, where at the pandemic’s peak they performed about 3,500 COVID-19 tests a day. A city of Miami firefighter for 35+ years, Gomez has also served as the city’s emergency manager through hurricanes and has led one of the 28 Urban Search and Rescue teams that have responded to scenes at national and international disasters. Gomez completed his Associate in Science and paramedic and EMT training at MDC, as well as part of his firefighter and police training, and has returned for specialized training and as an instructor.

After 20 years of running 911 calls, Miami-Dade Fire Rescue Battalion Chief Brandon Webb was pushed to the frontline. Webb, who attended the fire academy at Miami Dade College, works as the program manager for Florida’s Urban Search and Rescue Task Force, a team tasked with preparing and responding to state and national disasters that surpass the capacity of local authorities and resources. At the start of the pandemic, his team was initially tasked with testing large volumes of people and is now doing the same with vaccinations.

Sheila Jones-Coakley is the nurse manager of the dialysis unit at Nicklaus Children’s Hospital where she is an anchor for the kids she cares for, especially during the pandemic where patients are often separated from family and loved ones. Jones-Coakley, who has been a nurse for more than 30 years, completed the LPN and RN programs at Miami Dade College, worked at a community hospital and returned as an adjunct instructor. Coakley now tells her students they have MDC as anchor for them today and always, like it has been for her.

With more than two decades of service under his belt, Chief Brian Rafky leads the South Operations Division for Miami-Dade Police Department (MDPD). Most recently, he led the MDPD’s Special Victims Bureau (SVB), protecting vulnerable members of our community during the COVID-19 pandemic. After graduating and entering the police force, Rafky worked his way up, serving as lieutenant and sergeant in the domestic crimes unit, as well as director of the Southeast Florida Fusion Center. Rafky, whose mother was a professor at MDC, attributes his professional success to working hard, building relationships and seizing opportunities, skills he learned at the College.

Dr. Shirley N. Codada, an internal medicine physician who specializes in hospice and palliative care, serves as regional medical director for VITAS Healthcare programs serving Northern Florida and Georgia. Born in Haiti, Codada brings to VITAS more than 20 years of experience as she oversees the medical care of hospice patients and families in four VITAS programs in Florida, including Citrus County, the Nature Coast, Pensacola, and Panama City, and Atlanta. She earned her undergraduate degrees at MDC and Barry University and medical degree from the University of Florida, and began her palliative care and hospice career in 2002 as assistant medical director at North Broward Hospital District.

Betsy Godoy-Rosado is a Licensed Clinical Social Worker and mental health advocate who has dedicated her career to helping improve the lives of individuals and families in need. Godoy-Rosado, who studied psychology at MDC, attended the University of California, San Diego on full scholarship and completed her master’s degree at Florida International University. Today, she is the Clinical Supervisor with the EPIC Team at 4Kids, one of the leading foster care agencies in the country, where she and her team have gone above and beyond to make emotional connections with their patients during the pandemic.

Jessica Gutierrez-Castillo was looking for ways to help her neighbors during the pandemic. Passionate about food access, she co-founded Buddy System MIA as a way to combat food insecurity in South Florida. The network of 400+ volunteers began by running errands like grocery shopping and picking up medicine for people with health complications to reduce their risk of contracting the coronavirus. Today, Buddy System MIA has 1,000+ volunteers and has since set up 10 community fridges filled with fresh foods in South Florida, from Homestead to Hialeah. Gutierrez-Castillo, a first-generation college graduate, credits solidarity and community for Buddy System MIA’s success.

Caridad Cuellar was a school nurse at a middle school in Hialeah when the pandemic forced schools to shut down in March 2020. She shifted gears to provide telehealth for a community health center and, shortly after, contracted COVID-19 herself. After recovering from COVID-19, in the spring, Cuellar went back to the frontlines, collecting samples from patients at testing sites during the pandemic’s summer peak. When schools began to reopen in the fall, she returned to institute new protocols and teach students hygiene practices to prevent the spread. Cuellar, who now works as an urgent care nurse for Baptist Health, received her LPN, RN and BSN degrees at MDC and plans to complete her master’s degree.

Since the start of the pandemic, Cesar F. Larancuent has focused his efforts on coordinating the transportation of face masks, cleaning necessities, and critical medical supplies around the globe. Larancuent, who received his bachelor’s in supply chain management from MDC, has worked closely with both public and private institutions in the logistical planning and distribution of PPE equipment, hospital medical supplies, and essentials for our first responders. Larancuent and his team have worked tirelessly to route and deliver tens of thousands of day-to-day necessities, not just to homes, but also hospitals, pharmacies and retailers.