Jamaican Students at Howard University Receive US$100 Thousand in Scholarships

Jamaica’s ambassador to the United States Audrey Marks has lauded the Jamaica Howard University Affinity Network (JHUAN) for providing scholarship support to the tune of over US$100,000 to needy Jamaican students at Howard University over a three year period. 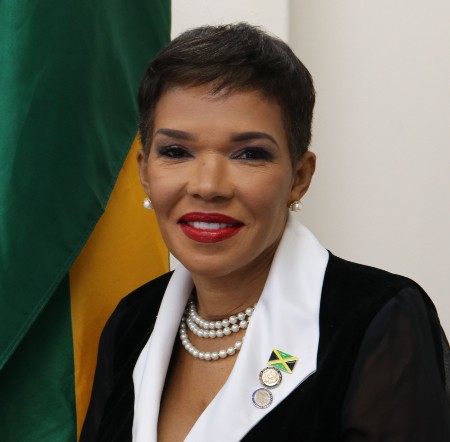 Jamaica’s ambassador to the United States Audrey Marks (Photo Credit Derrick Scott) She also congratulated the fifteen (15) students in the 2021 cohort who are recipients of an additional $45,000 in scholarships.

“Having been involved in the conception of this fantastic initiative three (3) years ago, I am truly proud of the remarkable strides made in such a short time, providing support to the tune of over US$100,000 to Jamaican students at Howard University.”

Speaking at the third annual scholarship awards on Saturday March 27, Ambassador Marks said the Howard University scholarship fund; JHUAN was “a very timely and useful initiative which, I hope can be replicated at other institutions of learning across the US with large Jamaican population.”

The Jamaican ambassador to the US pointed out that “in addition to the provision of scholarships, JHUAN was created to serve the Jamaican community through mentoring and career development.”  She encouraged the students to take full advantage of the mentoring and networking opportunities provided by JHUAN, thereby expanding their horizons and gaining the requisite tools to launch their careers.

“Historically, Howard has been the University of Choice for hundreds of Jamaican citizens, many of whom have remained here in the D.M.V area or have returned to Jamaica and have done exceptionally well professionally. Regardless of the path to success and fulfilment which you choose, may I also encourage you, as beneficiaries of the goodwill of others, to also give back to others in need when you are given such an opportunity in the future,” Ambassador Marks concluded.

In his remarks, Chairman of JHUAN, Don Chistian said “my organization is pleased to award these 15 scholarships to the tune of US$45-thousand to deserving students attending Howard who are pursuing various degrees. He pointed out that the scholarship programme was a part of a bigger effort to inspire and empower and motivate Jamaican students to take full advantage of their experience at Howard University.”

The JHUAN chairman recalled that the history of the establishment of the scholarship programme in 2018 was as a result of the collaboration and involvement of Ambassador Marks and Howard University president Dr.  Wayne Frederick.