KINGSTON, Jamaica – Jamaican schools will continue to benefit from professional and academic support provided by Cuban teachers, following the signing of an agreement between the countries on Wednesday to extend the bilateral cooperation in education. 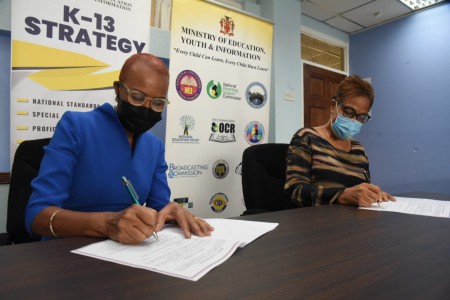 Minister of Education, Youth and Information Fayval Williams (left) and Cuba’s Ambassador to Jamaica, Ineìs Fors Fernaìndez, sign the agreement extending the bilateral cooperation in education between the countries.The primary areas of instruction covered under the agreement include Spanish, chemistry, physics, mathematics and physical education.

Minister of Education Fayval Williams said Jamaica has benefited significantly from Cuban teachers sharing their experiences and expertise in various subject areas for more than two decades since the signing of the first education agreement in 1997.

“We are happy to see this program continue, which has resulted in improved performance in the subjects taught, improved diplomatic relations between the Governments of Jamaica and Cuba, and an increased number of students being exposed to a second language,” she noted.

Currently, there are 86 teachers working at 78 schools – 46 primary, 32 secondary and four tertiary-level institutions.

A total of 18 teachers arrived in Jamaica for the start of the current academic year in September 2020 the majority of whom are teaching Spanish, while the others are providing instruction in areas such as physics, chemistry, mathematics, biochemistry and biology.

Williams noted that tablets were assigned to the Cuban teachers to facilitate virtual classes.

“In addition, many of them are teaching on television and radio to provide children in remote areas access to education. Some are also engaged in the development of learning kits for the primary level,” she said.

The Education Minister said available data indicate that approximately 31,000 children, as well as their communities, have benefited from the educational work of Cuban teachers this year.

“We, at the Ministry, are happy to see this program extended and hope that it will continue to redound to the benefit of the two countries,” she said.

Cuba’s Ambassador to Jamaica, Ineìs Fors Fernaìndez, in her remarks said that the signing of the agreement is an indication of the special bond of friendship that Jamaica and Cuba have enjoyed since the establishment of diplomatic relations in 1972.

“The agreement on education for the provision of professional and academic support between the Ministries of Education of our two beloved nations demonstrates our unwavering commitment to the development of sustained technical and functional cooperation programs,” she noted.

Approximately 438 Cuban teachers and professors have offered their services in Jamaica since 1997.