GEORGETOWN, Guyana – A new school term began in Guyana on Monday with health officials indicating that there will be a constant monitoring of students amid concerns that the Omicron variant is present. 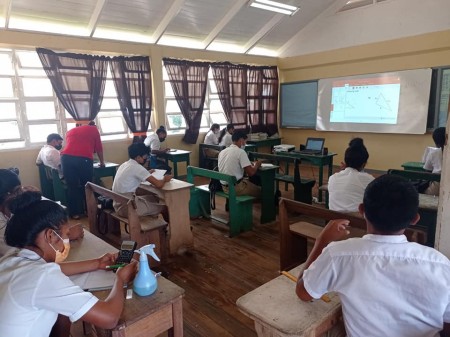 Students at North West District in the Hinterland last summer. (CINJ photo)Health Minister Dr. Frank Anthony told reporters “we’ll continue to monitor and see how that goes,” noting that children who have become infected with COVID-19 but are vaccinated usually experience milder symptoms in other countries where the presence of the Omicron variant has been confirmed.

“If there are children who get a more severe form of the disease, then they will have to be hospitalized and we will work with them accordingly,” Dr Anthony said.

“I think parents, teachers, everybody needs to encourage students to get vaccinated, get both doses of the vaccine. Later on, we will introduce the booster for them also to get boosted.”

Health officials acknowledge that while the Omicron variant is more transmissible, Dr. Anthony said that it does not appear to generate more serious symptoms.

The reopening of schools comes weeks after Minister of Education Priya Manickchand lamented that children were missing out on valuable learning time due to virtual or rotational school.

To allow for a safe reopening of schools, COVID-19 vaccines have been offered to teenagers aged 12 to 17. These students, even if unvaccinated, have been allowed to return to schools.

All Grade Six children are being allowed to attend face-to-face classes every day since they are scheduled to sit the National Grade Six Assessment (NGSA), Guyana’s secondary school entrance examination, later in the year.

Dr. Anthony told reporters that a total of 585 COVID-19 infections had been recorded over the past three days and while he believes the Omicron variant is in Guyana, it does not seem as though the variant is causing many more serious infections that require hospitalizations.

Dr. Anthony had previously attributed the noticeable increase in cases to the numerous social gatherings held over the Christmas holidays.

“There is an upward trend in these cases and again, we suspect that we might have the Omicron variant that is in circulation in Guyana,” Dr. Anthony.

According to official figures released here, on December 28, there were 32 new infections recorded, but one day later, the figure had risen to 87 with 157 cases recorded on December 30, followed by 178 cases on December 31.

For the first two days of this year, Guyana had recorded 487 new cases and Dr. Anthony on Monday that there have been 98 new cases, noting also that fewer tests were conducted.

“With the way that this has rapidly progressed over the last few days, we suspect that from an epidemiological point of view, we might have the Omicron that is in circulation here,” he said, adding that the authorities are “looking” at sending more samples overseas to test for the presence of the variant.

“In terms of hospitalization, the numbers have gone up over the recent couple of days, so we are now at 40 persons in hospital with 24 of them at the Ocean View hospital and we have six of those persons in the ICU.”