Government of Guyana Warns Teachers Not to Participate in Isolation Day

GEORGETOWN, Guyana – The Guyana government has warned of the possibility of teachers not being paid their salaries for the days they participate in a call by the Guyana Teachers Union (GTU) to address a number of grievances. 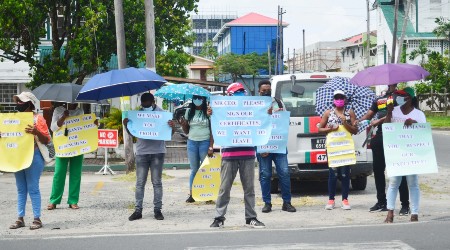 Members of the Guyana Teachers’ Union participating in one of their protests last September. (Orlando Charles’ photo)“Teachers in Guyana ought to be properly advised that heeding the call of the GTU to participate in the Isolation Day may be considered as an unauthorized absence from work, abandonment of their students and a gross dereliction of their duties. In this regard, the Ministry of Education will be under no lawful obligation to pay persons who are absent and abandon their posts on the 10th of January, 2022,” Labour Minister Joseph Hamilton said in a statement late Sunday.

But the GTU, in an immediate response accused Hamilton of failing to intervene in disputes with the Ministry of Education concerning the estimated 10,500 teachers.

“I want the Minister of Labour to understand that labor is not your field so don’t jump into education…and you even while you are Minister of Labour, you are lacking,” said GTU Coretta Mc Donald, describing the threat of loss pay as “foolish threats”.

The GTU has in a letter to its members called on them to embark on ‘Isolation Day’ Monday with the aim of pressuring the Ministry of Education to shut down all schools for 14 days from Monday, January 10 due to a surge in the coronavirus (COVID-19) cases here.

Hamilton said that while the union had on Saturday written to Chief Education Officer Dr Marcel Hutson urging the two-week closure, it did not refer to ‘Isolation Day’.

The GTU said that latest figures show that more than 175 teachers and more than 90 children have been tested positive with COVID since the re-opening of schools last week.

Guyana has recorded 1,070 deaths and 44,902 positive cases linked to the virus since March 2020 and last week the Health Minister Dr. Frank Anthony said that the Omicron variant of the virus may be responsible for the increased number of cases in recent days.

The GTU said also that among its concerns were the absence of the Minister of Labour when 27 teachers from one area were infected, the need for engagement, and the locking out of teachers from schools.

GTU President Mark Lyte said data about the conditions of schools were being systematically collected and so if the schools are closed, efforts should be made to ensure that there is proper ventilation, provision and repair of water and sanitation services, purchase of combination of chairs and desks to ensure social distancing, equitable distribution of sanitation supplies, the sanitization of schools and the provision of Internet-ready devices.

“The GTU is not asking for complete closure of schools. The GTU is asking that we put the systems right so that when our children and our teachers would have returned to school, that they are going to go into safe environments.”

But Hamilton said that a “strike disguised as an “solation Day ” will see classrooms being abandoned as virtual and face-to-face learning will cease.

A government statement said that the Labour Ministry plays an integral role in enforcing the Labour Act, which gives the Minister the authority to settle differences between an employer and employees.

The statement warned that “teachers partaking in a strike without legality or framework of a strike are subjected to no pay for however long their post is abandoned.

“In this regard, the Ministry of Education will be under no lawful obligation to pay persons who are absent and abandon their posts on Monday 10th January 2022,” said Hamilton.