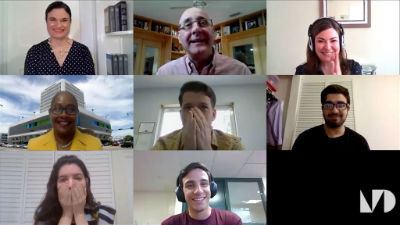 In addition to financial support, Cooke Transfer Scholars receive comprehensive educational advising from the Foundation to guide them through the process of transitioning to a four-year college and preparing for their careers. They also receive opportunities for internships, study abroad, and graduate school funding, as well as connection to a thriving network of over 2,700 fellow Cooke Scholars and alumni.

MDC students have been awarded more Jack Kent Cooke Scholarships than at any other college in America. In fact, MDC set a record last year when seven scholars were selected from the college, making it the first time in the program’s history that this many scholarships were awarded to a single institution at once.

Nearly 1,500 students from 311 community colleges applied for the 2020 Cooke Undergraduate Transfer Scholarship. Only 50 were selected.

“We are so proud of these students, who through hard work and determination rose above the ranks and are on a path to fulfilling their dreams,” said MDC’s Interim President, Dr. Rolando Montoya. “They are a wonderful example of the drive and talent of our diverse student body.”

This year’s winners include two graduates from the Padrón Campus and two from the Wolfson Campus. Click on the following link to watch students’ reactions when MDC’s leadership surprised them with the big news – https://youtu.be/kGYI-OU_YK8.

Cuban-born Reinaldo “Rey” Figueroa studied noncredit English for just one year before being accepted into MDC’s Honors College. He majored in computer engineering and was recently awarded the prestigious Jorge Mas Canosa Family Foundation Transfer Scholarship. Last fall, he was invited to attend a national aeronautical conference for professionals in the field and was granted a scholarship. Through that participation, he was awarded a full-time paid summer internship with Boeing in Northern Virginia. While at the Honors College, Figueroa has assisted Professors Jorge Gilbert and Jyrko Correa in their research. He’s maintained a 4.0 GPA while caring for his parents. He hopes to attend the Massachusetts Institute of Technology.

Liz De Armas has come a long way since arriving Miami from Cuba three years ago. She also studied noncredit English for one year then applied to the Honors college. De Armas is a civil engineering major heavily influenced by a fully paid internship last summer at Station1 in Boston, which is a design thinking initiative for students interested in how technology is infused into all we do.  She was selected out of a national pool and was the first student to represent the Honors College and MDC at the program. She credits the experience for shifting the way she sees her career developing. De Armas has also maintained a 4.0 GPA and would like to attend Northeastern University in the fall because of its co-op learning model.

Having experienced and survived the Syrian Civil War, studying by candlelight with battles raging nearby, not knowing what might happen next, has made Hamzeh Alturk appreciate every single opportunity afforded to him in the US. He was accepted to The Honors College in 2018 and later to the Bridge to the Baccalaureate program, a partnership with the University of Miami. As part of this program, he conducted and presented research at the Annual Biomedical Research Conference for Minority Students (ABRCMS). In addition, Alturk holds several leadership positions on campus, and was one of 42 students selected to attend the Global Citizenship Seminar in Salzburg Austria. He has applied to more than 20 universities, but his top choice is the University of Southern California.

Nelson Hidalgo was also accepted to The Honors College and the Bridge to the Baccalaureate program, where he worked on several research projects and learned to use Solid Works for 3-D printing of behavioral apparatus that can be used for behavioral training. He used the software for recording electrophysiological signals and presented his undergraduate research work at the ABRCMS conference. As president of the Makers Club, Hidalgo leads a group of students and volunteers that support the Makers Lab at MDC’s Wolfson Campus. Most recently, he was part of a team working on a collaborative initiative between MDC and MIT Global Co-Creation Lab. Hildalgo was among a group selected from more than 5,000 applicants nation-wide to receive the Barry Goldwater Foundation Scholarship this year. He has applied to Cornell, Johns Hopkins, U Michigan, MIT and Stanford Universities.

About the Jack Kent Cooke Foundation

The Jack Kent Cooke Foundation is dedicated to advancing the education of exceptionally promising students who have financial need. Since 2000, the Foundation has awarded over $200 million in scholarships to over 2,700 students from 8th grade through graduate school, along with comprehensive educational advising and other support services. The Foundation has also provided $110 million in grants to organizations that serve such students. To learn more, visit www.jkcf.org.