They journeyed from as far as Australia, England, Jamaica and Bermuda to join other alumni  gathered in New Jersey for the 10th Annual Valentine’s Day Gala last Saturday, February 15, organised by the North America Chapter of the Cedric Titus Old Students Association (CTOSA). 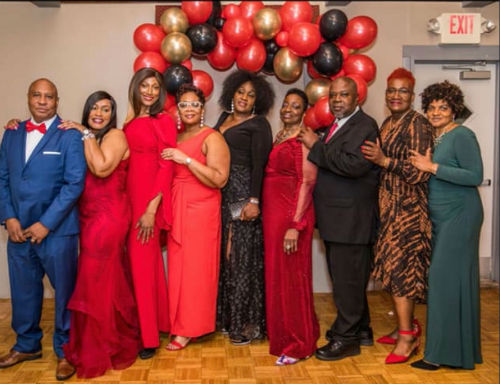 President of the Cedric Titus Old School Association, North America Chapter, Dr. Avril A. Keldo (7th from right) flank from left to right by members of the graduating class of 1979 at the 10th Annual Valentine’s Day Gala of the North America Chapter of the Old Student Association on Saturday, February 15, 2020 at Venue 518 in Bound Broad, New Jersey .The event brought together just over 200 hundred past students and friends of the high school to Venue 518 in Bound Broad, New Jersey. The alumni honoured former Principal, Mrs. Elette M. Fletcher, who gave over 34 years of outstanding service to the alma mater, Cedric Titus High School, of Clark’s Town, Trelawny.

The tribute from Mrs. Belver Williams-Niblett, who was the school’s first Head Girl, lauded the former principal, who was unable to attend in person, for the many ways in which she had served the school community.  Mrs. Fletcher joined that staff of Cedric Titus in 1977 as Vice Principal and Spanish Teacher and was elevated to Principal in 1995. She retired in 2011.

Tributes to the former principal underscored her role in creating and fostering an environment conducive to learning by all students, including reading rooms that Mrs. Fletcher had built and equipped with technology and furniture to assist the learning level of all students.

Also noted was Mrs. Fletcher’s instrumental role in getting Cedric Titus High School equipped with a computer laboratory and other technologies to enhance learning; and how she had also launched a community skills training in conjunction with H.E.A.R.T. for part students who had left school without the needed qualifications.

Mrs. Williams-Niblett hailed the former principal  as the one who had initiated the past student association in Jamaica.

In the message she sent to mark the occasion, Jamaica’s Ambassador to the United States, Her Excellency Audrey Marks, commended the alumni association for organising this annual fund raising effort to assist provide scholarships, as well as school furniture, among other things, for the alma mater. 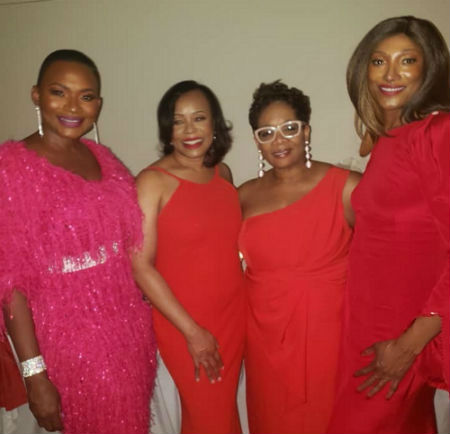 “Let me take the opportunity to congratulate the group of former students for becoming the catalyst in spearheading the formation of this august and well needed organization,” said Ambassador Marks.  She described the association’s goal – to  support the school financially and with scholarships for graduates pursuing tertiary education – as a worthy endeavour.”

The Ambassador commended the President, Dr. Avril A. Keldo, for her outstanding leadership of the organization.

She praised the invaluable support of the organization, saying the CTOSA members not only demonstrate a sense of patriotism but also a commitment to the wellbeing of future generations, especially those who will attend the noble institution and have an opportunity to learn in a comfortable and inclusive environment.

Ambassador Marks also commended former principal Fletcher for her outstanding contribution to education and for the role she played in nurturing the lives of many young people who  are now making their contribution to society.