GEORGETOWN, Guyana – Britain’s High Commissioner to Guyana, Jane Miller, says her country has become the single largest trading partner with Guyana after indicating that trade between the two countries had amounted to GPB 560 million (One British Pound=US$1. 25 cents) last year. 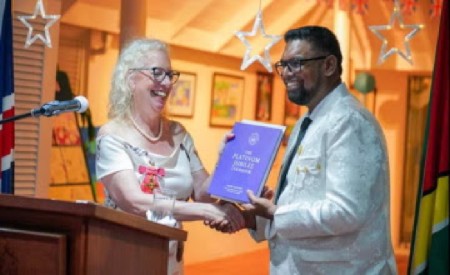 United Kingdom High Commissioner Jane Miller presents a copy of the Golden Jubilee booklet to President Irfaan Ali (DPI Photo)“The trade has expanded six times in the last 10 years,” she said, as she addressed a ceremony here on Thursday night marking the Platinum Jubilee celebration and the 96th birthday of Queen Elizabeth II.

The British diplomat told the audience that total trade between the United Kingdom and Guyana last year had increased by 21.6 per “making Guyana, the UK’s largest trading partner with the Caribbean”.

She said that in 2011 trade between the two countries totaled GBP 94 million and that plans were being explored to establish a British Chamber of Commerce in Guyana.

Earlier this year, a British trade mission visited Guyana and a memorandum of understanding was signed between the Georgetown Chamber of Commerce and Industry and the long-established business organization named the Caribbean Council.

“As a result of this visit, particularly His Excellency meeting with Prime Minister Boris Johnson, we are now in the process of developing a more formal framework that will enable a deeper relationship including for future commercial engagements,” Miller said.

President Ali said that as both countries take part in celebrations for Her Majesty the Queen, it is also an opportune time to celebrate the relationship between Guyana and the UK.

“There is an envelope of resources through the UK that is there for government and the private sector that is in the hundreds of millions of pounds,” he said, adding that the two countries were exploring the possibility of removing trade barriers that would also allow smooth access of Guyanese products to that European market.