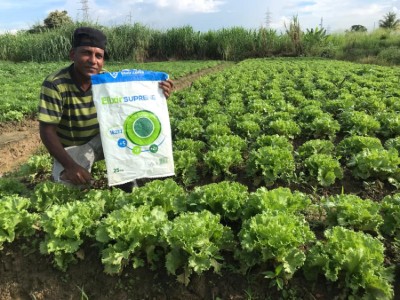 Photo courtesy of Trinidad-based fertilizer company ElixerEnergy and Energy industries Minister, Stuart Young in a statement said Monday’s ruling had also concluded that those imports did not hurt American producers.

Young recalled that both he and Prime Minister Dr. Keith Rowley had raised the issues surrounding fertilizers being produced in Trinidad and Tobago with decision makers in Washington “at many different levels and in many different quarters during the past few months and this decision of the U.S. International Trade Commission in favor of Trinidad and Tobago is a welcomed one”.

He welcomed the determination of the US International Trade Commission (ITC) which would prove beneficial to the farming industry abroad and consumers who are being affected by substantial price increases due to the Russian Ukraine dispute.

According to Reuters report, the panel’s vote may help ease shortages and price increases for fertilizers brought on by Russia’s invasion of Ukraine, both major fertilizer exporters.

The article notes that the decision cancels recently imposed US combined anti-dumping and anti-subsidy duties of up to 132.6 percent on Russian urea nitrate fertilizer solutions and 113.5 percent on such imports from Trinidad and Tobago.

The Commerce Department announced the final duty rates on June 21 as part of an investigation launched in June 2021 after a petition from CF Industries Nitrogen of Deerfield, Illinois.

“We have been sounding the alarms and telling the ITC commissioners that tariffs will drive up input prices to even more unaffordable levels for farmers and cripple our supply. I am so glad they listened.”

The Commission said that all five commissioners voted to reject the tariffs on the non-injury finding.

In 2021, the United States imported US$231.1 million worth of urea ammonium nitrate from Trinidad and Tobago, according to the Commerce Department.

Had the Commission found that US fertilizer producers were being injured by the imports from Russia and Trinidad and Tobago, the duties would have been locked in for five years.

There are growing warnings that sky-high prices for fertilizers are curtailing their use, reducing crop yields and potentially leading to food shortages around the world.