PORT OF SPAIN, Trinidad – The Trinidad and Tobago government Monday said the country had recorded a windfall of more than eight billion dollars (One TT dollar=US$0.16 cents) as a result of the increase in prices for oil and energy products on the global market, but warned that the funds would not be used solely to pay one section of the population salary increases and arrears. 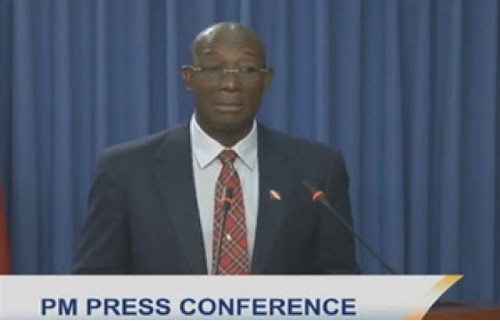 But he told reporters that the windfall would be used to lessen the deficit from TT$16 billion to just under four billion.

“But remember that deficit is not money in hand. It is the difference between earnings and expenditure. Our earnings have improved considerably in the 2022 period… and that is why our deficit is going to be better off”.

Rowley acknowledged that inflation has had an impact on the way of life here, but that Port of Spain had been able to keep inflation to a low of just over five per cent “considerably less than it is in other countries which are in fact facing the kind of challenges we are facing”.

Prime Minister Rowley said that the financial windfall would not be used solely to meet salary increases and arrears to public servants, adding that billions of dollars had to be borrowed to deal with the COVID-19 pandemic.

“Now that the market is giving us some additional revenue, unplanned but fortunately grateful to have that, the Minister of Finance is able to tell us that for the period we are examining …we would have earned an additional TT$8.14 billion…what do we now do with that money and that is what the discussion in the retreat was about”.

Rowley said that even before the discussions had taken place, the government had gone to the Parliament for approval in spending TT$2.6 billion of the windfall through a budget adjustment.

“How much of that TT$5.2 billion do we spend on back pay to public servants and the fuel subsidy. We offered public servants a two per cent increase and I need not tell you how that was received. But we can only offer what the country can afford,” Rowley said.

He said if the government offers a four per cent increase “and if that four per cent is accepted, we are talking about an immediately paid back pay of TT$2.4 billion, which is roughly half of the increased revenue”.

He said if that percentage in salary increase is accepted, it would result in on going recurrent expenditure of TT$419 million annually.

“The question is what are we committing ourselves to? And of course that is only for the public service as we know it. Because you know once the public service back pay has been settled it reflects itself through the public sector and not just public servants on the gazette sheet (but) the others in state enterprises and so on and they will all expect an increase of a similar nature.

“You are talking about another TT$1.5 billion on the back pay side and another TT$300 million on the continuous side every year. So if you add those two things together….you talking here about four billion dollars in back pay and approximately TT$800 million increase going forward”.

Rowley reminded journalists that the multi-billion dollar windfall had been achieved as a result of “unusual circumstances in the hydro carbon market” noting also the actions taken by the United States   government at home and abroad to decrease the price of fuel.

“Once those consumer prices are coming down…it will automatically transmit itself out into forcing down the price of oil. So we have to view the high prices for oil as temporary and the gains we have made in terms of cash as a temporary pool of cash.

Rowley told reporters that even after all the difficulties such as the impact of the coronavirus (COVID-19) on the economy and “all that we are going through Trinidad and Tobago still has a substantial cash of foreign reserves…well beyond the minimum…and we have foreign reserves for seven months import where four months is the usual yard stick”.

He said even as the government is pleased with the economic situation, it has had to implement a reduction in the amount of money spent on subsidizing fuel, which he estimated at TT$300 million monthly.

He said contrary to statements in the public domain the government has not removed the fuel subsidy, insisting “we have reduced it.

“Had we not reduced it we would have been in a much more difficult situation on the other parts of the swing on the merry go round. We still because the price of oil has become so high in recent times, we are currently committed and are paying TT$300 million a month and growing in fuel subsidy. Had we removed the fuel subsidy as being said by some people that would have been TT$300 million available to do other things”.

But he said because his administration had adopted a strategy for managing “the oranges in the basket, what we have allocated for support on the fuel price side…multiply that by 12 that is TTT$3.6 billion for the year.