PORT OF SPAIN, Trinidad– The Trinidad and Tobago Energy and Energy Industries Minister, Stuart Young, Monday said he supports reports that despite the trend to renewables, there is agreement that oil and gas will continue to be important primary fuels for the coming decades. 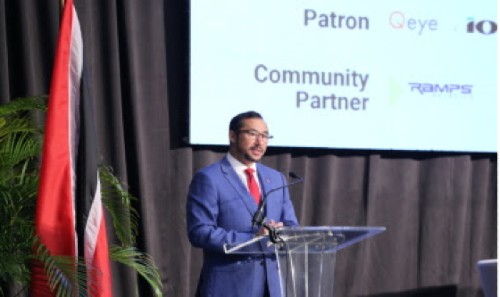 Energy Minister Stuart Young addressing Geological Society of Trinidad and Tobago conference.“I believe this and I am an advocate for the continued and increased use of natural gas, as it is the cleanest fossil fuel. In 2020, fossil fuels represented approximately 79 percent of primary energy consumption worldwide and by 2050, they are projected to represent approximately 65 percent of primary energy under the GECF assumptions, but in a much larger market,” Young told the conference of the Geological Society of Trinidad and Tobago.

He said that the share of petroleum and other liquids in the primary energy mix is projected to decrease from 30 percent in 2020 to 25 percent by 2050.

“Natural gas demand is projected to increase by 46 percent and its share in the energy mix from 23 percent in 2020 to 27 percent by 2050. The Asia Pacific region, almost doubling its current gas consumption, will make the largest contribution to this growth with more than 45 percent of the additional global gas volumes through to 2050,” he added.

Young said that the power generation sector will also take a frontline place, accounting for 42 percent of the total increase in gas demand.

“As a small island state and a hydrocarbon economy we recognize our responsibility to transition to a low carbon economy and, thankfully, decades ago we identified natural gas as the fuel of choice in achieving this objective.”

He said in this regard, The Trinidad and Tobago government is aligned with the policies of its major gas producers who consider natural gas production as the transition fuel in the movement to net zero carbon emissions.

“We have been, and intend to continue, working closely with our stakeholders whether in the upstream, midstream and downstream sectors toward the achievement of a low carbon economy. We are determined to keep Trinidad and Tobago competitive in the changing and evolving global energy sector.”

Young said that for the foreseeable future, Trinidad and Tobago’s economy will be dominated by oil and gas, adding “we are fortunate to have as partners energy majors BP, Shell, Woodside (formerly BHP), Repsol, EOG Resources, and the smaller outfits, like Perenco and Touchstone who have committed to tangible and sustained investment in the upstream.

“We also have newcomer, De Novo who has proved itself as a stranded, and smaller field producer. As a government we will facilitate upstream investment with the appropriate policies to ensure that we maximize the recovery and monetization of the country’s hydrocarbon resources, which are substantial.”

Young said that the latest gas reserve audit established that at the end of this year, technically recoverable resources amounted to 23.2 trillion cubic feet (tcf) and prospective of 55.2 tcf .

He said Trinidad and Tobago has 10 ammonia plants, seven methanol plants and four LNG Trains, all of which depend on natural gas as the primary feedstock.

He said currently the National Gas Company (NGC) is in negotiations with upstream companies for new gas supply contracts in order to maintain its supply to its downstream customers. Government is also actively engaged in negotiations with Atlantic Shareholders on a long-term agreement and liquefaction license for the operation of a restructured unified Atlantic LNG Facility.

“We have spent considerable time, energy and effort on the sector and in particular on negotiations for the past six and a half years. Natural gas production which was on the upswing up to 2019 was negatively impacted by the COVID-19 pandemic in 2020.

“While upstream operations continued relatively unaffected, projects to bring on new and replacement production were delayed. The pandemic also severely curtailed global demand in a number of industries and particularly for energy related products. Petrochemicals were hard hit. The prices of ammonia and methanol which are major exports of Trinidad and Tobago fell to low levels in 2020 and 2021.”

Young said this led to the operations of a number of petrochemical plants being temporarily curtailed and that the combination of project delays and the fall in demand led to a reduction in natural gas production.

“At the time, the naysayers, including, unfortunately, some of whom were being paid by those with self-serving agendas which were not in the best interest of the citizens of Trinidad and Tobago, were painting a negative narrative of collapse and disaster at Pt. Lisas.

“However, the government and NGC held firm to positions to protect the citizens and extract fair and equitable returns for the population. Fortunately as difficult as it was at the time, we stood on principle and steadfast in our negotiations and today, the citizens are reaping the monetary benefits of these positions we took with increased revenue to the NGC and the Treasury.”

Young said that the global energy market has since rebounded. The crude oil price of crude WTI which averaged US$37 per barrel in 2020 is currently revolving around US$100 per barrel. Henry Hub, which is the main marker price for the majority of the current LNG gas contracts, averaged US$2.03 per mmbtu in 2020.

But Young said that these commodity prices are cyclical and “we must be prepared for the highs and lows”.

He said in order to benefit from the improved energy prices, gas and oil output needs to be accelerated. Natural gas production received a major boost with the start-up of BPTT’s Matapal, Shell’s Barracuda and BHP Ruby-Delaware in 2021. The momentum continues into 2022 with BPTT’s Cassia C Development and Shell’s Colibri Project both of which we negotiated in 2018/ 2019.

Young said over the next five years there are projects with gas reserves of three tcf which are earmarked for sanctioning.

“We are actively engaged with the upstream companies to facilitate the timely sanctioning of the projects,” Young said, adding “Trinidad and Tobago’s gas industry is at the point where we need to convert prospective gas resources of 55.2 bcf to reserves.

“To this end government is pursuing an ambitious bid-round program which commenced with the deep-water bid-round which was closed on June 2, 2022,” he said, adding that bids were received for four blocks from a consortium of BP Exploration Operating Company and BG International Limited, a subsidiary of the Shell Group of companies.

Young said that the four blocks which received bids are located in the Eastern Deepwater transition area in water depths ranging from 1000 meters to 2000 meters and that reservoir presence has been widely proven, with a range of high-quality slope to basin floor fan deposits near the Columbus Basin and deep-water channelized lobes in the deep-water area, which form complex structural and stratigraphic traps.

“All of the blocks have been subject to previous exploration activity which indicated the presence of hydrocarbons. It is our expectation that the application of new technologies will realize the potential of these blocks.”

Young said given the global competition for capital within companies, the bids are indicative of the upstream companies continuing commitment to investment in Trinidad and Tobago.

“The bids are currently being evaluated and an announcement of the results will be made within three months, on or before September 2nd, 2022,”  he told the conference.