The Bahamian Government Agrees to Sale of Grand Lucayan Resort

NASSAU, Bahamas – The government of The Bahamas says it has entered into a US$100 million agreement with the US-based Electra America Hospitality Group for the purchase of the Grand Lucayan resort. 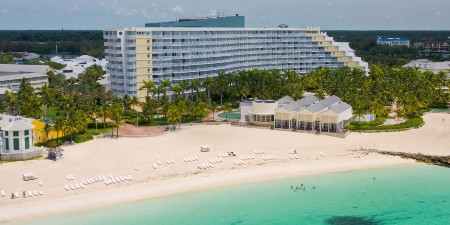 Deputy Prime Minister and Minister of Tourism, Aviation and Investments Chester Cooper, described the initiative as “the beginning of the renaissance and rebirth of Grand Bahama Island”.

He told a news conference that the agreement is subject to a 60-day due diligence period, with closing no later than 120 days.

Electra America Hospitality Group (EAHG) describes itself as a unique joint venture between Electra America, a leading real estate operator and capital provider, and AKA, a leading provider of long- and short-term luxury accommodations.

It said the partnership is designed to capitalize on dislocation in the hotel industry and that EAHG generates premium returns for investors through the acquisition, renovation, and management of well-located hotels assets with upside potential in major US markets.

Cooper said Electra has committed to an estimated US$300 million in construction and renovation to rebuild the Grand Bahama resort into an environmentally sustainable luxury resort and that the property will be redesigned to include a luxury lifestyle hotel, an upscale convention hotel to cater to groups and the convention market, along with an all-suite family resort.

Cooper said that the government expects the deal to be completed within the next few months and that renovations and construction are expected to start shortly thereafter. He said there will be 2,000 construction jobs and 1,000 permanent jobs.

“We believe this will be a win for the Bahamian people and a win/win for the people of Grand Bahama,” he said.

The former government of prime minister Hubert Minnis bought the property from Hong Kong conglomerate Hutchison Whampoa in August 2018 for US$65 million.

Cooper said that when the former administration purchased the resort it made a series of mistakes that left taxpayers on the hook for hundreds of millions of dollars and an ongoing monthly subsidy of US$1.5 million a month.

“We always believed in the viability of the property, but did not believe it belonged in the hands of the government. Rather, we sought a buyer for the Grand Lucayan that was well resourced, well-intentioned, desired to be a strong community partner, a vision for the resort, and a willing partner in the shared vision for the growth of Grand Bahama.”