KINGSTOWN, St. Vincent - The St. Vincent and the Grenadines government says it has taken emergency steps to prevent the fuel surcharge on electricity bills from surpassing the record high of EC$0.67 cents (One EC dollar=US$0.37 cents) per unit in 2008. 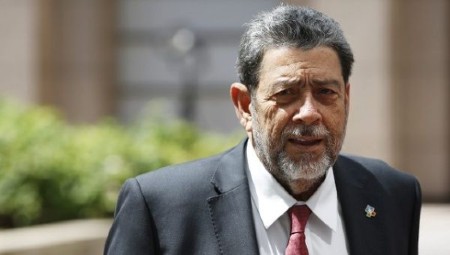 “The bill is going to go up,” Gonsalves said, as he told a radio audience of an emergency meeting with the Director General of Finance and Planning, as well as Chair of the Board of VINLEC, Rene Baptiste, and acting chief executive of VINLEC, Vaughn Lewis.

“The highest that it has ever been is in 2008 when it was 67 cents, approximately, per unit per kilowatt hour, the fuel surcharge,” he said, noting that back then, unrefined diesel  sold for US$147.50 a barrel.

“Now this would have taken it higher,” he said, adding that he called the VINLEC chief executive officer, Thornley Myers, who is in Canada, and Minister of Finance Camillo Gonsalves, who is attending the annual Caribbean Development Bank meeting in Turks and Caicos.

He said a similar call was made to the Director General of Finance and Planning “as we had to do something.

“Basically, what we are going to do, we are going to split the 14 cents. Let the consumer pay seven and we pay seven,” he said, adding that this will benefit VINLEC’s 47,000 consumers, including close to 42,000 domestic consumers.

“We will keep it below what the highest point has ever been. But still it will increase. VINLEC will absorb about EC$500,000 of that. And the government will put a number close to EC$300, 000,” Gonsalves said, adding “if this has to be repeated next month, we’ll have to probably reduce the way that formula is between the government and VINLEC.

“It’s a difficult period. And, as always, I have to come to the people and be very honest. If we were to absorb all of it, it will cost us about EC$1.6 million and when you take into account that we are already doing over a million dollars a month in providing the subsidy on the gasoline [and diesel] at the pump…”

Gonsalves said that a consumer who pays EC$135 would see an increase slightly less than EC$10, about half of what it would have been had it not been for his government’s intervention.

He said that it did not make sense to remove value added tax on electricity “because if I do that, half the people who are poor people not paying the VAT in any case already because they consume less than 150 units a month… So I could do something which will help them.”

He anticipated criticism about why the subsidy was being extended to commercial consumers.

“But if I didn’t give the businesses the relief, they were going to pass it on. In any case, there are some mom and pop shops, which are really small people, own-account people who don’t have a domestic meter, but a commercial … Those are people at the margins too. I have to help them.”

Gonsalves said that with the rains beginning to return, hopefully hydro-electricity generation would increase rapidly and help to contain the fuel surcharge.

Prime Minister Gonsalves said that he is in conversation with Venezuela regarding how soon Caracas oil initiative, PetroCaribe would resume, noting the continued sanctions imposed by the United States.

“So there are some logistics which have to be worked out because we have to make sure we don’t run afoul of these unilateral sanctions the United States of America has put on Venezuela…,” Gonsalves said, noting that the sanctions are intended to put pressure on Venezuela, Washington recently sent a delegation to Caracas to discuss sourcing fuel.