KINGSTON, Jamaica – Prime Minister Andrew Holness says that the country’s public debt has remained flat over the past year despite the major fall in Government revenue and increase in expenditure as a result of the coronavirus (COVID-19). 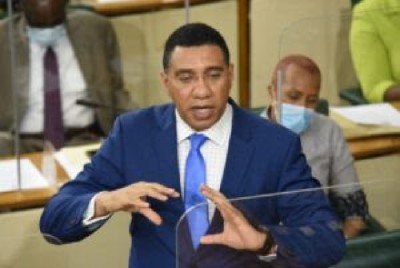 Holness who was making his contribution to the 2021/22 Budget Debate in the House of Representatives on Thursday said that at the start of the 2020/21 fiscal year, the Government had cash reserves of approximately J$90 billion (One Jamaica dollar =US$0.008 cents) and when the COVID-19 pandemic occurred, “we were able to finance a 3.5 per cent fiscal deficit with nominal debt virtually flat”.

The achievement, he said, is notable at a time when Governments, globally, issued a record US$16.3 trillion in new debt in 2020 and are expected to borrow another US$12.6 trillion this year to cushion the blow of the pandemic.

The Prime Minister added that Jamaica has also been able to maintain its highest credit rating in 20 years from Standard and Poor’s and in 14 years from Fitch “while many other countries have suffered downgrades”.

The Prime Minister argued that maintaining the country’s macroeconomic stability and debt sustainability “in the face of the most severe health and economic crisis the world has ever seen in nearly 100 years did not happen by chance”.

“We were able to do this because [of] the buffers that we had built up from prudent fiscal management over a number of years,” he pointed out.

He also told legislators that building approvals have been granted by the requisite government agencies and the project was now going through the public investment process to be followed by the procurement and implementation phases.

Concerning the fight against COVID-19, the Prime Minister said that he intends to get vaccinated, but he will wait his turn in line in keeping with the prioritization order set.

The Prime Minister noted that some public officials including ministers and Members of Parliament in the 60 and over age group have been vaccinated. However, he said, “I will await my turn in the line”.

“I will be taking my vaccination along with front-line public sector workers, meaning those who serve and interface with the public directly, such as cashiers, bearers, receptionists, and field officers.”

He said that given that there is more than enough demand for the 64,400 doses of vaccines available and they should be assurance distributed equitably, orderly, and strategically to protect the health care system, reduce hospitalisations and reduce deaths among the most vulnerable.

Over 17,000 people including healthcare workers, the elderly, and security forces have been vaccinated so far .