In March 2021, the not seasonally adjusted unemployment rate in Miami-Dade County was 8.2 percent. From February 2021 to March 2021, there was an increase of 7,800 nonagricultural payroll jobs, which is a 0.7 percentage point increase. Many sectors have begun adding jobs. The County had a reduction of 82,500 nonagricultural payroll jobs (not seasonally adjusted), from March 2020 to March 2021 which was a 6.8 percentage point decrease, still reflecting the COVID-19 crisis.

Due to the impact of COVID-19, there continues to be a sharp decline in non-agricultural payroll jobs throughout most industries when comparing year over year (March 2020 with March 2021). This is in particularly true when comparing the three months leading up to the COVID-19 crisis to the first three months of 2021. The graph below shows the payroll data since November 2018. 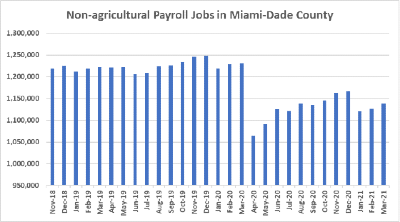 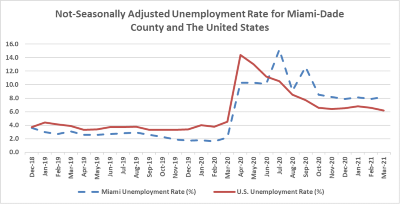 In March 2021, the seasonally adjusted unemployment rate for Miami-Dade County (taking seasonal fluctuations in the labor force into consideration) was 8.1 percent, which is 6.2 percentage points higher than in March 2020. The unemployment rate is 0.3 percentage points lower than in February 2021 when it was at 8.3 percent. The seasonally adjusted unemployment data allows for better analysis over longer periods of time and reflect the long-term trends more clearly.

From the data and analysis above, we continued to observe the negative impact of COVID-19 on our local economy. Nevertheless, the community needs to remain focused on job-retention projects in targeted industries, as well as all sectors. These industries have been identified as the Miami-Dade County industries most able to create additional well-paying job opportunities, leading to an improved quality of life for Miami-Dade County residents. The Miami-Dade Beacon Council continues to aggressively work on attracting new companies to our community and work on the expansion and retention of existing business. For more information, visit www.beaconcouncil.com.

Additionally, analyzing Miami’s unemployment history in the graph below, the Miami metro area labor force statistics use a different measurement method than all other counties in Florida. The information for the monthly employment and unemployment estimates come from Current Population Survey (CPS). There are only seven large areas across the nation which uses this labor force statistics model. The increase in the count of unemployed individuals in Miami-Dade County in September 2020 and the subsequent decrease in October was driven by the responses of Miami residents to the Current Population Survey.