GEORGETOWN, Guyana – President Irfaan Ali says the Caribbean should consider making separate investments in hydrogen as the renewable energy source of the future. 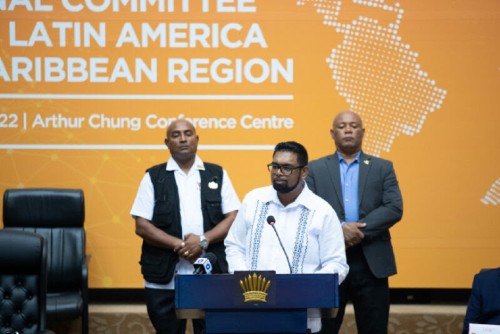 President Irfaan Ali speaking at the ISA forum.Making the suggestion during discussions held at the International Solar Alliance (ISA) Regional Meeting of the Latin America and Caribbean Region here on Thursday, he said hydrogen is a viable renewable energy solution due to its many advantages, chief among them its affordability.

“We have to start designing a strategy that looks at green hydrogen and how that is formulated, because the reality is if hydrogen is for the future and the financial implication is that banks and the international community are willing to finance hydrogen against solar then, unfortunately, it is the death of solar. This is the reality,” he said.

“If the world moves into the direction that we are going to push hydrogen, then the financing for hydrogen has to come from somewhere, and if hydrogen is the preferred investment for sustainable energy and for renewables in the future, then definitely the types of resources behind solar would not be there.”

President Ali pointed out that while the Caribbean region has great solar potential, the cost to fund the projects is enormous.

He, therefore, posited that natural gas be examined as a reliable renewable energy source that can be utilized at a significantly lower cost.

As it relates to Guyana, he said that during his recent visit to the United States, following a meeting with the Energy Department, it was decided that a technical team from Guyana would work along with the department to examine the Amaila Falls Hydropower Project.

“The hydro potential here is enormous and we have to advance that project and that is part of our renewable pathway,” President Ali said.

He noted that one trillion cubic feet of gas will generate approximately 142 million megawatts of hours of energy.

Solar energy generation is one component of Guyana’s low-carbon goals under its Low Carbon Development Strategy (LCDS). Under the national advancement plan, Guyana is looking to complement the national grid with other forms of clean and renewable energy – namely natural gas, hydropower, wind power and biomass. It is anticipated that by 2030, 70 per cent of Guyana’s energy mix will be supplied through green energy.