ST. GEORGE’S, Grenada – The Grenada government says it intends to begin paying pension to eligible public sector workers who retired as far back as 1985, by November this year. 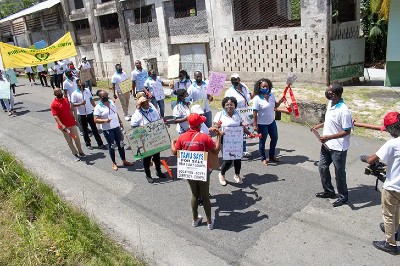 Public sector workers in Grenada protest for better pensions and wages last summer.However, newly elected Prime Minister Dickon Mitchell says a plan has to be formulated as to whether or not the retroactive payment of EC$60 million (One EC dollar=US$0.37 cents) will be paid in full or over a period of time.

“We reiterated our commitment to pay the pensions and we indicated to them we are not fighting legal entitlements and in that regard we indicated that we want to address the retroactive part of the pension because we felt those persons would be the one most disadvantaged having not had the pensions paid at all,” Mitchell said, following weekend talks with trade union representatives on the issue.

“The data coming out from the Ministry of Finance is that the retroactive payment is going to be in the region of EC$60 million. We indicated to the unions that one way or the other we intend to make a payment by the 30th of November.

“The question is whether we pay all of it by 30th November or whether we make an initial payment and make proposals for the balance to be paid over a period of time,” said Mitchell, who had attended the meeting accompanied by his Economic Development Minister, Lennox Andrew and the attorney General, Claudette Joseph.

A statement issued by the Public Workers Union (PWU) on Monday confirmed the commitment by Mitchell that his administration would honor a High Court ruling upholding the 1958 pension for public officers.

In the statement, the PWU said that trade unions representing teachers, prisons and police met with Prime Minister Mitchell last weekend to “discuss the single item agenda, pension and gratuity”.

According to the PWU the unions received “firm commitment” from Prime Minister Mitchell to upholding the March 29th, 2020 High Court ruling, as well as the “government will commence the payment pensions and gratuities to all affected retired public officers from 1985 to present” and that the payment will begin from November 30th this year.

In addition, the PWU said that the unions were given the commitment “that the estates of all eligible officers and teachers who have since died, will be subsequently paid” and that “all public workers retired in 2022 will be paid their gratuity and pension commencing 2022”.

The PWU said that the meeting was conducted in “a cordial manner” and that Prime Minister Mitchell, who came to office after leading his National Democratic Party (NDC) to a 9-6 victory in the June 23rd general election, has also given an assurance to honoring the payment of pensions to all eligible public officers and teachers “who qualify under the law, according to the various Pension Acts going forward”.

The government’s proposals have been submitted to the unions and staff associations for review with a second meeting scheduled for the end of July.

“We made it clear in our campaign that we were serious about addressing the pension issue and in a broader context, I think anyone who works all their life, retires and find themselves unable to live must ask what type of society I am living in and more importantly what does the future hold for those who are working,” Prime Minister Mitchell said.

“So for us it is not a…a political issue….and I am not in any way diminishing that it will have a financial impact on the government. But I have said time and time again, I prefer a poor government and a wealthy, healthy citizen than a wealthy government and poor citizen,” Mitchell added.

In April this year the former government said it had appointed the former president of the Caribbean Court of Justice (CCJ), Sir Dennis Byron, to a five-member committee to provide technical advice and general guidance following a High Court ruling that could result in the government having to pay a significant amount of money to public servants.

The workers were disqualified from receiving a pension following the enforcement of the Pension Disqualification Act (PDA) in 1983 and their representative trade union bodies took the government to court challenging the PDA.

On March 29th, the High Court ruled that the PDA, which was originally approved during the reign of the left-wing People’s Revolutionary Government (PRG) of then prime minister Maurice Bishop, and then validated by the Validation Act of 1985, was unconstitutional.

The pension issue surfaced with the collapse of the 1979-83 PRG, which during its term in office, had established the National Insurance Scheme (NIS) and replacing the pension scheme for public servants that had been enshrined in the Grenada Constitution.

But the High Court ruling has restored the original pension scheme to public sector workers.

The government had promised to name a fifth representative from the St. Kitts-based Eastern Caribbean Central Bank (ECCB).

The former government had said that the High Court ruling had created a two-pillar pension system for public sector workers which, without further changes, would create a large fiscal burden on the state, since in its current construct, it is non-contributory.”

The fiscal obligations of the court ruling are still being tabulated but preliminary indications are that it could cost an estimated EC$465 million (One EC dollar=US$0.37 cents) followed by an average EC$120 million annually for at least the next 37 years the former government had noted.