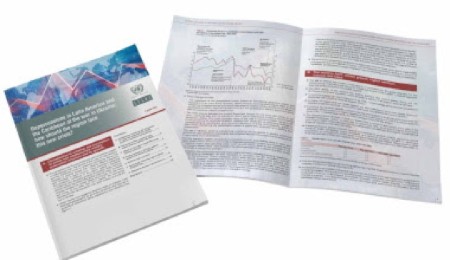 It said the region’s economies face a difficult scenario in 2022 in an “external context of uncertainty, inflation, particularly in food and energy, and a deceleration of economic activity and trade”.

According to the new report titled “Repercussions in Latin America and the Caribbean of the war in Ukraine: how should the region face this new crisis?”, ECLAC said the region confronts domestic contexts marked by a sharp economic slowdown, rising inflation and a slow and incomplete recovery of labour markets, “which will increase poverty and extreme poverty levels”.

As a result, the report notes that 7.8 million people are forecast to join the 86.4 million others whose food security is already at risk.

The document, which was presented at a news conference by the Commission’s Acting Executive Secretary Mario Cimoli, emphasizes that the current situation should not be seen as an isolated phenomenon since its effects meld with those caused by more than a decade of accumulated crises: the international financial crisis, economic tensions between the United States and China, and the pandemic.

In that context, the study indicates that after the economic expansion seen in 2021 of 6.3 percent growth in regional gross domestic product (GDP) , the region will notch average annual growth of 1.8 percent in 2022 and is seen returning to the slow growth pattern exhibited from 2014 to 2019 -just 0.3 percent annual growth on average, with the resulting decline in GDP per inhabitant.

The report notes that progress on vaccinations, fewer restrictions on mobility and the reopening of schools “will drive a recovery in labour participation levels, especially among women, who were the most affected in this regard, having left the labour market in greater proportion to men during the pandemic.

“The combined effect of greater labour participation and a low pace of growth, and therefore of job creation, is expected to lead to an increase in the unemployment rate in 2022.  The economies of Latin America and the Caribbean began to experience an increase in the inflation rate in 2021.”

While the region’s annual inflation amounted to 6.6 percent by the end of 2021, it had risen to 8.1 percent by April 2022, the report states, adding that many central banks anticipate that inflation will remain high for the rest of the year.

Taking the effects of slow growth and accelerated inflation into account, the study forecasts that poverty and extreme poverty will rise above the levels estimated for 2021.

“This outcome reflects the sharp increase in food prices. These levels are markedly higher than those seen before the pandemic and entail another setback in the fight against poverty,” according to the report, noting also that higher commodity prices, the increase in transportation costs and disruptions to international supply chains will affect the region’s goods exports.

However, the report notes the price increase for several of the main products that the region buys and sells abroad raises the projection for 2022 to a 23 percent expansion, both for exports and imports.

It says that pro-growth fiscal and monetary policies will be needed to respond to the current scenario and stimulate sustainable and inclusive growth.

The report proposes continuing to use fiscal policy as a central component of development policy, “which requires strengthening public revenue to increase fiscal space.

“It is necessary to reduce evasion, reorient tax expenditures and bolster the progressivity of the tax structure. To contain inflationary pressures, which are fundamentally driven by supply-related factors, monetary policy must utilize the broadest possible spectrum of available tools.

“This necessitates combining the use of the monetary policy rate with macro-prudential and foreign exchange instruments, with the aim of tackling inflation while minimizing the negative effects on growth and investment.

“What is needed without delay is to sustain the welfare of the poorest sectors. Food security must be a priority. Thus, international trade in food and fertilizers should not be restricted since doing so would accelerate inflation and hurt those who are poorest.

“Officials must also consider measures such as maintaining or increasing food subsidies, implementing agreements with producers and marketing chains to contain prices of items in the basic food basket, and reducing or eliminating tariffs on imports of grains and other basic products,” the report stated.

In the medium term, the study recommended that agricultural and industrial policies are needed to strengthen support for agricultural production while also increasing efficiency in the use of fertilizers, prioritizing biofertilizers.

“Industrial policy is key to reducing dependence on fertilizer imports in the medium term,” it states, adding that energy security is essential to make progress on renewable sources and regional energy integration.

“In the current context, fuel price stabilization mechanisms are needed along with targeted and temporary subsidies for the most vulnerable population groups and the productive sectors geared towards the domestic market.”

Cimoli said Latin America and the Caribbean faces “new geopolitical scenarios,” stating that the breakdown of globalization may lead to “different regional configurations that will define their policies based on sovereignty objectives in defense, energy, food and key industrial sectors, from those involving the highest technology to those of widely used inputs, like fertilizers.

“In the face of the regionalization of the global economy, our region cannot continue to act in a fragmented way. It is necessary to increase the role of regional coordination in crisis response, formulating and implementing responses by Latin America and the Caribbean as a whole, or its integration blocs,” he added.