BRIDGETOWN, Barbados, – For the first time in ten years, BICO Limited is exporting from its factory in Barbados to a neighboring Caribbean island. 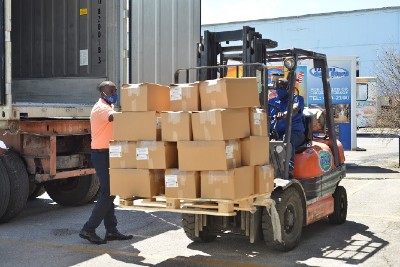 BICO’s Sales and Business Development Manager, Dwayne Holmes, doing final checks on some of the products headed to Dominica. The region’s premier ice cream manufacturing company has forged a partnership with well-known retail and wholesale distributor Jollys Pharmacy and Mega Store in Dominica.

BICO’s Sales and Business Development Manager, Dwayne Holmes, said the partnership was “very easy to develop” given the sustainable approach to business that both companies share.

He noted that the reopening of the local factory and resumption of local ice cream manufacturing has also resulted in other regional partners asking when the company would resume exports.

“We have received expressions of interest from distributors, including a few in Trinidad, Antigua and in South America. Our ice cream factory is flavor flexible. We are currently reviewing the expressions for alignment with the strategy of the brand and the products they required,” Holmes explained.

BICO’s Commercial Director, Haydn Alleyne, said the current export initiative demonstrates that, although these are challenging times, there are still companies in Barbados that are willing to move forward with manufacturing.

“For us, we want to be trailblazers. We want to put BICO ice cream out there as the premium brand in the Caribbean being made and produced in Barbados and also take it to the next level. That is our intent with the product,” he said.

“With a well-loved and leading brand such as BICO, we anticipate great feedback from the general public and much greater and exciting opportunities and partnerships with the company,“ he said.

The shipment left the Bridgetown Port on Tuesday and is expected to take about one week to reach its destination. The shipment includes ice cream products as well as BICO branded freezers.