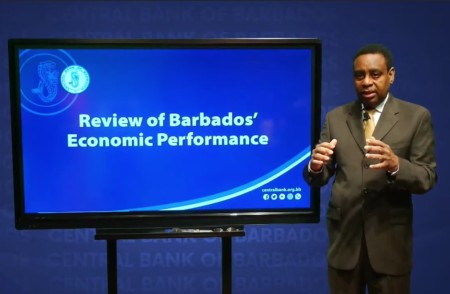 Central Bank Governor Cleviston Haynes delivering his economic review of the first quarter of 2021.He also projected that following the sharp decline in economic activity last year, the economy will make only a modest recovery this year, growing between one and three per cent.

“This forecast for weaker growth than envisaged three months ago, reflects the impact of renewed travel restrictions in source markets, and the national pause in February, that lowered economic activity more than expected during the first quarter of the year,” Haynes said as he delivered his first-quarter economic review.

The economy contracted by 19.8 per cent in the first quarter of the year and Haynes attributed that mostly to the weakened performance in the tourism sector, although he noted that the fallout in other economic activities, and depressed private spending were also contributing factors.

He noted that tourism output plunged by an estimated 96 per cent, and the mild upturn in visitors registered in the fourth quarter of 2020 was reversed, with arrivals for the quarter being less than half of those in December.

He said while pent-up travel demand supports the outlook for an eventual post-COVID-19 recovery, tighter travel restrictions and protocols, including by Canada and the United Kingdom, and the ongoing suspension of   cruise operations, prevented an early resurgence.

“Pre-COVID, forecasts were for revived domestic economic activity in 2020 as the policy measures implemented post-mid-2018 took root, enabling a rebuilding of economic buffers and a restoration of confidence. These expectations were dashed by the severe impact of the virus on the key tourism sector and the spill-over effects on planned investment, consumption and other exports,” the Central Bank Governor said. “The short-term cost of the pandemic in terms of jobs and incomes, therefore, has been considerable.”

“The global economy which was also hard-hit by the virus is now poised to recover but, despite the roll-out of vaccines at home and abroad, the prospects for a robust domestic turnaround this year have been dampened. However, the reserve and financing buffers accumulated over the past year will help government to manage the needed adjustments,” he added.

According to Haynes, uncertainty continues to cloud the outlook for the Barbados economy for 2021.

He said the eventual outturn will be influenced in large measure by the country’s ability to contain the domestic spread of the virus and by the timing and pace of the resumption of activity in the tourism sector.

“As more individuals are vaccinated both locally and abroad, international air and cruise traffic is expected to resume gradually, boosting demand for ancillary services. The impact of the ongoing volcanic eruptions and resulting ash falls on growth is likely to be muted but downside risks remain from future major eruptions,” he said.

Noting that the economy remains heavily dependent on tourism, Haynes said that to accelerate the recovery and facilitate market diversification, tourism planners will need to explore opportunities for targeting source markets that have a low incidence of the virus and/or high level of vaccinated citizens.

“To boost medium-term growth prospects, promote diversification and enhance economic resilience, structural reforms that are designed to facilitate the ease of doing business and improve competitiveness will remain critical. The shocks provided by COVID-19 and more recently the ash fallout from the eruption of the La Soufriere volcano, underscore the need to accelerate the transition to a digital environment,” he added.

“The country has more than adequate buffers to meet its external obligations. However, the delay in the recovery of the tourism sector, weak demand for exports, rising oil prices and reduced external borrowing from the international financial institutions, are expected to prevent further accumulation of international reserves this year,” the Central Bank Governor added.