KINGSTON, Jamaica – Governor of the Bank of Jamaica (BOJ), Richard Byles has urged persons  using cryptocurrencies or who are contemplating this, to do so cautiously. 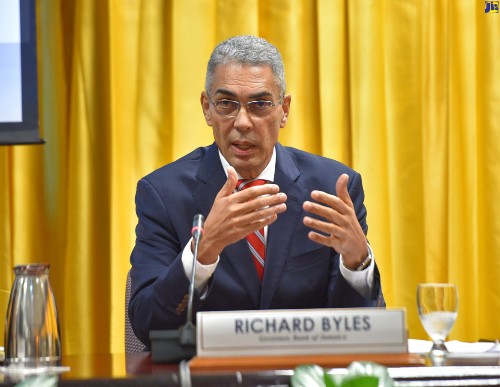 Governor of the Bank of Jamaica (BOJ), Richard Byles. (Photo via JIS)Speaking during a panel discussion at the recently concluded Jamaica 60 Diaspora Conference, Byles said the institution is mindful to advise individuals of the unpredictable nature of cryptocurrencies’ value.

“We do take the time to warn people that those values can go up and down, and quite [volatilely] so too,”

A cryptocurrency is a digital currency designed to function as a medium of exchange that is not reliant on any central authority, such as a government or bank, to uphold or maintain it. Examples of these are Bitcoin and Ethereum.

Conversely, a central bank digital currency (CBDC) is the digital form of a country’s fiat (government-issued) currency that is not backed by a physical commodity such as gold or silver.

Byles said he regards cryptocurrencies as more of an investment instrument “because their value is not sufficiently stable to be a good means of payment,” as is the case with CBDC.

“So, if you’re, hopefully, a sophisticated investor [who] can understand cryptocurrency, go ahead and use it. But we don’t see it as a currency that is good for transactions and for making payments,” he argued.

Byles said the BOJ continues to advise individuals that “we only back our Central [Bank] Digital Currency, [and that] it’s not backed by any private investor”.

The BOJ is spearheading implementation of Jamaica’s CBDC, dubbed ‘JAM-DEX’, for which phased full-scale rollout is slated to commence this year, following a successful pilot that concluded in December 2021.

BOJ Director for Payment Systems and Policy, Mario Griffiths, who also spoke, informed that the Bank has been publishing its caution statements on virtual and cryptocurrencies.

“We [did] so in February 2018 as well as July last year, and we plan to do so this year… just indicating to persons who hold the cryptocurrencies of the risk and that the risk is borne by them,” he said.

The Jamaica 60 Diaspora Conference was hosted at the Ministry of Foreign Affairs and Foreign Trade in downtown Kingston from June 14 to 16, under the theme: ‘Reigniting a Nation for Greatness’.