What Did Lincoln and Washington Read?

George Washington and Abraham Lincoln loved to read and study. What did these presidents read? Discoverbooks.com dug in and found some of their favorites. 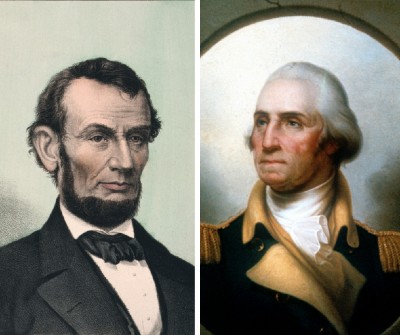 George Washington's favorite novel was Don Quixote. It is reported that he read it during the cold winter at Valley Forge. We imagine the adventures of Quixote and his sidekick Sancho Panza helped Washington escape the horrors of real war.

Washington studied Plato's Republic and his definitions of justice and public virtue. The last book we will highlight is Marcus Aurelius' Meditations. Aurelius is known as the "last good emperor" of the Roman empire. His book describes his struggles and how he overcame them. Washington used this book to learn how to be a leader.

Abraham Lincoln was known for his passion for learning. As soon as he learned to read, he borrowed books from everyone. He worked hard to overcome his "humble" beginnings.

It is said his childhood readings enhanced his powerful writing skills. Books such as Aesop's Fables, Robinson Crusoe, and The Pilgrim's Progress were among Lincoln's many books read in his younger years. As he matured, Lincoln moved to books about Ben Franklin, George Washington, elocution, and guides to the English tongue.

According to an account written by Lincoln's stepmother, “Abe read all the books he could lay his hands on — and when he came across a passage that struck him he would write it down on boards if he had no paper & keep it there till he did get paper — then he would re-write it — look at it repeat it — He had a copybook — a kind of scrapbook in which he would put down all things and this preserved them.”

Becoming an educated, useful person doesn't happen overnight. It is slowly developed over time. These two men were ordinary until history called them to be leaders.

Reading and writing are a part of the "becoming" process. Reading is one of the greatest gifts we have been given. "A capacity, and taste, for reading, gives access to whatever has already been discovered by others. It is the key, or one of the keys, to the already solved problems. And not only so." -  Abraham Lincoln