The Bookseller of Florence

The Florentine Renaissance is best known for its magnificent art and buildings, which include works by Michelangelo and da Vinci and structures like the Dome cathedral and the Basilica of San Lorenzo. But at the time, Florence flourished in other ways not as well known. 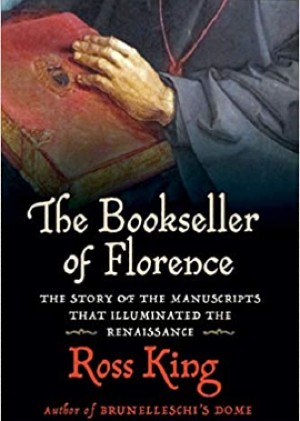 As Italian city-states like Florence experimented with a limited form of democracy and many debated how to lead ethical lives and be responsible citizens, interest grew in classical texts in Greek and Latin, many of which were decaying in monasteries around Europe. As a result, booksellers became ever more important in helping find the texts and creating more accurate, more durable--and often expensive, beautifully illuminated--copies.

In the center of this intellectual ferment, one bookseller stood out: Vespasiano da Bisticci. Born in 1422, he started in the physically challenging role of book binder, binding together sheets of parchment. But he quickly became interested in the content of the books, and with his easy sociability became a friend of scholars and the merchants, particularly the Medicis, among major art patrons and book collectors. Vespasiano created libraries for customers who included popes, kings, princes and scholars across Europe. He also wrote biographies of 300 "illustrious men of the 15th Century," a book that in the 1800s helped define the concept of what is now known as the Renaissance.

In The Bookseller of Florence: The Story of the Manuscripts that Illuminated the Renaissance(Atlantic Monthly, $30), Ross King brilliantly traces the life and career of Vespasiano. At its height, that career crumbled because of a kind of transformative disruption in the book world that people in the age of e-books and audiobooks might appreciate: in 1440, Johannes Gutenberg invented the printing press. Soon copies of books, printed on paper and easily affordable, flooded the market and led to the demise of the illuminated parchment manuscript, upon which Vespasiano's business was based.

As he did so well in Brunelleschi's Dome, in The Bookseller of Florence, Ross King captures the magic of Florence and one of its leading lights at a key moment. --John Mutter, editor-in-chief, Shelf Awareness