Student Resistance in the Age of Chaos

Mark Edelman Boren's Student Resistance in the Age of Chaos is one of those rare acts of historical sleight of hand where something we have seen fleeting glimpses of for years suddenly looms large and makes sense in a majestic new way. Working as Mark's editor for the last two years, I learned so much. 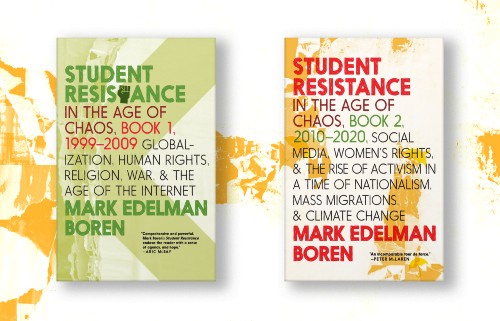 We already know that a student-led democracy movement in Hong Kong stood up to China and saw the human cost that many of its leaders have paid. We might remember that Slobodan Milosevic's resignation in September of 2000 was the culmination of a nationwide uprising led by a student organization named Otpor (Resistance) that had formed two years earlier. In the US, in the first two decades of 21st century, students have led the anti-war protests leading up to the Iraq War, the anti-sweatshop protests that targeted multinational corporations like Nike whose products were often produced using child labor and/or under inhumane working conditions, and the anti-racism movement that would eventually lead to Black Lives Matter. Students around the world, led at times by the great teenaged environmental activist Greta Thunberg, have been the ones leading the politicians and even the scientists to turn the attention of the world's leaders to addressing climate change.

And yet, until Mark Boren showed us, we didn't realize that student activism is a global movement—or that it has met with global repression on the part of authoritarian and democratic societies alike—and that this international student movement is still the world's best safeguard of democracy and also of our human sanity everywhere! We didn't know because all the reporting we had seen only talked about one or another movement in one country or region, never of a global movement.

There are some 1.5 billion students in the world today, and they have the ability to communicate with one another and to organize and demand changes within their societies, as no other group can. It is partly out of fear of organized students that governments across the globe have invested so heavily in surveillance and enhanced communications technologies during the last two decades. As students have gained the ability to act more spontaneously and in a more decentralized way, so have governments the world over increased the speed of their response, often resorting to arresting student leaders on the eve of demonstrations for example. In many countries, to be a student leader is to put your life at risk.

In order to tell this story, Mark Boren put together a team of graduate students and researchers to help him cull through mountains of data. He had already written an earlier book on the history of student resistance up until 1999, so he knew the territory. He realized that the dynamics of the story shifted from year to year and from decade to decade, especially over the last twenty years. He also found that, as strategies succeeded in one country or region, they were often then adopted in others. As Boren went to work, the book blossomed from one volume into two, and in 2031 there will surely be a third, since this isn't the kind of story that ever ends exactly. When you see how everything fits together, that's when you understand the monumentality of this global student movement, and why it is truly students who have the best hope of changing our world.