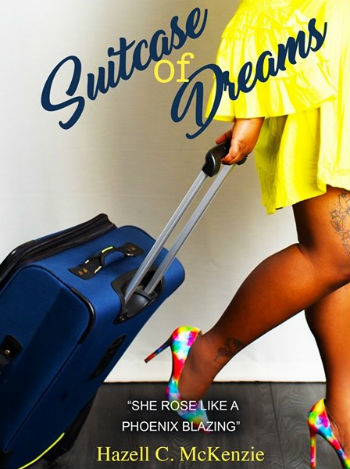 “Suitcase” is being promoted as “memoirs” which “aim to be a beacon of hope to those who are struggling through various stages of mental illness and to provide real insight and spark constructive conversation about the trials and tribulations which lead to and are caused by these situations.”

McKenzie was born in St. Vincent and is based in the United States. She’s been a social worker, mental health ambassador, recording artiste, television personality, entrepreneur and single mother.

According to her, the inspiration behind “Suitcase” began more than 20 years ago when she migrated to the U.S. as a teenager hoping for a better life. The book explores the growing pains she suffered as a new Caribbean immigrant adjusting to life in the U.S., which would set her on a path of emotional challenges, including dealing with family members’ deaths, difficulties of single parenthood, battles with chronic depression, stagnation, anxiety, paranoia and a lack of coping mechanisms for the ordeals which would eventually push her to the verge of committing suicide.

“I want to touch many lives through the various experiences outlined in this book,” McKenzie was quoted as saying in a release promoting the book.

“Everyone from immigrants who are struggling to assimilate into a foreign culture and single mothers who are caught up in the struggle to anyone who may be battling with depression, anxiety, PTSD and suicide ideation.

“I want them to know that the burden they carry or the pain they mask is just temporary and with perseverance, hope and the right coping tools deliverance is possible. I am a living testament of this.”