Black cartoonists like Jackie Ormes, George Herriman and Ollie Harrington paved the way for the diverse voices and perspectives in today's comics, and the myriad styles in which Black artists practice their craft. 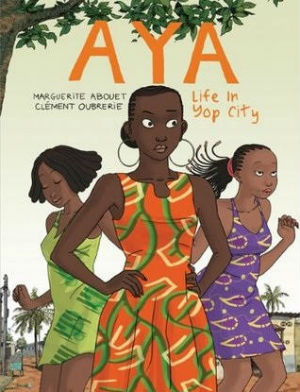 Illustrator James Otis Smith worked with Ted Fox graphically to adapt Fox's 1983 Showtime at the Apollo: The Epic Tale of Harlem's Legendary Theater (Abrams ComicArts, $18.99). Smith's evocative shades of nightclub blue bring to life Fox's sprawling history of the Apollo Theater and its many legendary performers. The neon marquees that punctuate each chapter, announcing Ella Fitzgerald, James Brown, Prince, Chris Rock and Jay-Z, remind readers that behind one of the country's foremost cultural institutions is American history itself.

From Harlem, Marguerite Abouet and Clément Oubrerie take us to 1978 Yopougon, the working-class section of Abidjan. During this postcolonial era, the Ivory Coast flourished and its illustrious capital, Abidjan, was an international destination, and both a playground and place of promise for its inhabitants. In Aya: Life in Yop City (Drawn & Quarterly, $24.95), readers see in the protagonist Aya an image of her own ascendant nation: anchored by tradition, yet curious to see all that lies beyond its bounds. Readers who pick it up might find parallels between the youthful antics of Aya, Adjoua and Bintou and many Western coming-of-age stories. Aya: Life in Yop City perhaps most closely finds an analogue as a West African Sex and the City, wherein young women contend with the pitfalls and rewards of love, friendship, and adulthood.

Bttm Fdrs(Fantagraphics, $24.99) by Ezra Claytan Daniels and Ben Passmore confronts the darker realities of urban life in a surreal neon palette. As slumlords build luxury condos in historically Black neighborhoods, a seemingly self-propelling force of slime emerges from every drain, toilet and cellar. Daniels and Passmore's social commentary on gentrification in the not-for-the-squeamish style of David Cronenberg brings a dark comedy to the country's urgent housing crisis.