Is it just me, or is everyone in the process of decluttering at the moment? I blame the new Netflix series Tidying Up with Marie Kondo for this resurgence of decluttering (originally made popular by Kondo's 2014 book, The Life-Changing Magic of Tidying Up; Ten Speed Press, $16.99). Which is not to say I'm not a fan of decluttering; on the contrary, it has me thinking about how to stick to the goal of a more minimalist lifestyle after the original clearing out. 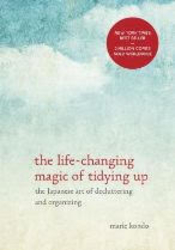 In Goodbye, Things (Norton, $21.95), Japanese editor Fumio Sasaki recounts his experiences getting rid of nearly everything he owned (including his bed). In Year of Less (Hay House, $15.99), finance blogger Cait Flanders documents her one-year experiment with not shopping for anything beyond the absolute essentials (like groceries). Both accounts are drastic, but can provide inspiration for any reader desperate to declutter (even if not to such extremes). Glenn Adamson's Fewer, Better Things (Bloomsbury, $27) drives home a similar lesson using a different approach. Adamson encourages readers to reconsider things themselves: their purpose, their craftsmanship, their use. Perhaps more meaningful connections to the things we choose to keep will remind us that there is more to life than the number of things we have.

For a long while, I'd held on to the idea that minimalism was inherently cold and distant, picturing black-and-white functional furniture and sparsely decorated spaces. Cozy Minimalist Home (Zondervan, $24.95) reminds us that minimalism does not have to be ascetic--it can simply be a way of living. And if that way of living isn't for you? Well, there's always The Joy of Leaving Your Sh*t All Over the Place(Countryman Press, $14.95), which is exactly what it sounds like: a slightly absurd (if still heartfelt) response to the book that started this whole decluttering trend. --Kerry McHugh, blogger at Entomology of a Bookworm