Author and Illustrator Floyd Cooper is Dead at 65

Floyd Cooper, the author and illustrator of children’s books whose work spotlighted Black history, died after a battle with cancer, the Associated Press reports. He was 65. 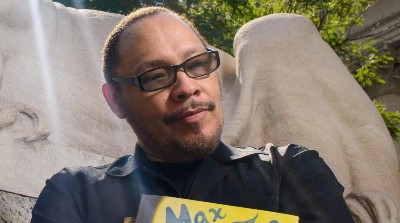 Floyd Cooper. Photo by Jacob BickenstaffCooper was born in Tulsa and educated at the University of Oklahoma. He made his debut as an illustrator in 1988 with Grandpa’s Face, written by Eloise Greenfield, and went on to provide the art for children’s books such as Be Good to Eddie Lee, written by Virginia Fleming; Meet Danitra Brown, written by Nikki Grimes; and Gingerbread Days, written by Joyce Carol Thomas.

He also wrote and illustrated several books, including Mandela, Juneteenth for Mazie, and The Ring Bearer.

His most recent books, A Day for Rememberin’, written by Leah Henderson, and Unspeakable, written by Carole Boston Weatherford, were published this spring. Both received starred Kirkus reviews.

“A beloved friend, Floyd was not only an artist and author, he was a man of character, and he brought that unfailingly to his art and work,” Gauch said.

Cooper was remembered by admirers on social media. On Twitter, Nikki Grimes wrote, “I will be weeping off and on all day, without apology. Floyd Cooper has passed away. His depth of talent was greater than he knew. I feel so blessed to have worked with him, and to have called him friend. It's impossible to calculate how much he will be missed.”