More a visual history than textual, We Were Never Intended to be Citizens tells the story of the Black American experience through images, some iconic, that have come to define a race of people. This little book delivers bite-sized lessons simple enough for youngsters to digest yet accessible to adults. The photos paint vivid pictures of the struggles blacks in America have been facing for hundreds of years, and the triumphs and successes many have attained in spite of racial and social barriers. 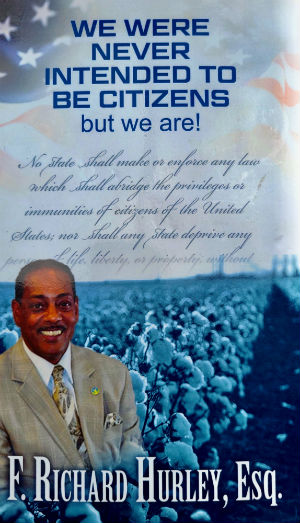 A compilation of historical facts laid out in chronological order highlighting the abuse of enslaved Africans brought to the new world by force, the development of institutional racism, protest, tragedy, and remarkable achievement are the markers that give this book relevance.

As we go through civil unrest as a result of abuse and murder perpetrated by racist police in the United States, this book can serve as a reminder for people of colour that what we are seeing and experiencing in these unprecedented times is a continuation of the strategy developed by the dominant class to oppress a race of people. Hurley’s book reminds us that is no longer acceptable.

In fact, the author highlights the history of federal actions and laws that were created to disenfranchise people of colour. For example, the Dred Scott decision of 1856 that freed some Africans, ruled that blacks whether free or enslaved were not citizens of the United States, and the Jim Crow laws in 1896 that mandated segregation based on the ‘separate but equal’ edicts.

But, the civil rights era beginning in the mid-1950s would see the turning point in America because of some heinous acts committed against blacks. Well documented with images of the period, readers are reminded of some harsh truths that marked American history. This was also the era when black people rose up against oppression through marches, freedom rides, sit-ins, protests, and prayer. Some gave their lives for the cause, as Hurley points out. But, he doesn’t stop there, for out of the carnage many rose to prominence, and he celebrates them too.

Yes we have progressed, Hurley expresses, but he warns African Americans not to fall into the trap of taking on identities created by the dominant class. He cautions against images we paint of ourselves in the media, television, films. He references television shows like “Good Times”, “The Jeffersons”, “Love and Hip Hop” and leaves us with images we should emulate and learn from — Leontyne Price, Oprah Winfrey, Simone Biles, former President Barack Obama. Indeed, the final page sends a clear message. Juxtaposing photos of the 45th President and Obama, Hurley declares “45 still won’t accept the fact that former President Obama is a citizen, but he is!