Lewis Hamilton equalled the legendary Michael Schumacher’s all time Formula One record of 91 wins when he captured the Eifel Grand Prix at Nürburgring. 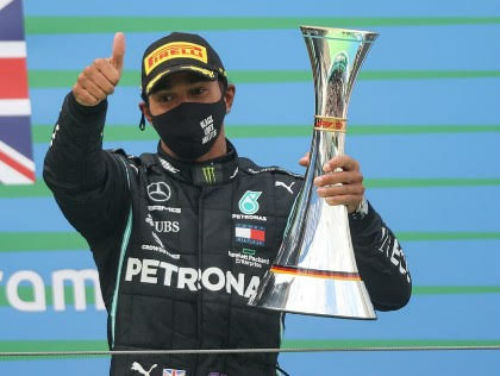 Mercedes driver Lewis Hamilton celebrates his record-equalling win on Sunday.Starting from second on the grid on Sunday behind Mercedes teammate Valterri Bottas, the 35-year-old Hamilton snatched the lead on lap 13 and when Bottas was forced to retire with engine problems five laps later, the race was there for the Brit’s taking.

He then drove superbly to finish nearly five seconds ahead of Red Bull’s Max Verstappen and register his seventh win of the season and put him in sight of as many world titles, which would also equal Schumacher’s record.

“It’s definitely not sunk in, that’s for sure. I don’t know how it is for other drivers when they have these wins but it takes some time for you to analyze it and for it to sink in, to realize what it actually means,” Hamilton told a media conference afterwards.

“But like all of us, I grew up watching Michael win all of those Grands Prix and I couldn’t have fathomed equalling him. I think getting to Formula One was the first step of the dream and obviously emulating Ayrton. But Michael was just so far ahead.

“It’s beyond my wildest dreams to think that I’m here today having equalled him and I just feel really humbled by the moment and the opportunity I was given when I was 13 by Mercedes to join this team and I feel really proud to continue to represent them and to have brought this record to Mercedes.

“Hopefully we have got more records to break and to make. Hopefully they know it was a good investment.”

Hamilton, whose paternal grandparents hail from Grenada, is F1’s first and only Black driver and has dominated the sport in recent years winning the last three titles and four in the last six years.

And with a 69-point lead in the drivers’ standings, Hamilton is the heavy favorite to extend his successful run and says he was still energized by the thrill of racing.

“I love the challenge. It is so hard and I think I would be willing to say there’s potentially not enough respect that is probably given to all these drivers who dedicate their lives in terms of preparation,” Hamilton pointed out.

“The amount of work that goes on in the background to be able to do what all of us do in this sport, past and present, is really remarkable and I love being a part of that.

“I love that challenge, I love the challenge that Max gave me today. I love seeing him behind me, seeing the challenge that Daniel (Ricciardo) gave Max also, the sport, the smell of it, the whole aura and atmosphere it creates is going to be difficult to let it go.”