GEORGETOWN, Guyana – Transparency Institute Guyana Inc. (TIGI) Monday called for a Commission of Inquiry to examine the disclosures and allegations of bribery and corruption made against the Vice President Bharrat Jagdeo during an international television program earlier this year. 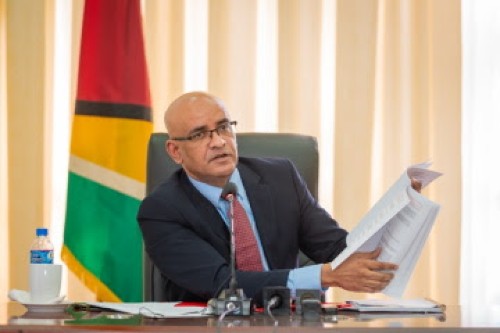 Vice President Bharrat Jagdeo (File Photo)Jagdeo has denied the US-based Vice News investigative report and President Irfaan Ali has indicated that there should be an investigation.

In a statement, TIGI said it does not know how such spectacular allegations could be allowed to fester for so long without action on the part of the government especially after both President Ali and Vice President Jagdeo were recorded as having agreed that an investigation was necessary.

It noted that since the first report became public, Jagdeo’s zeal to respond to the reports appeared to have withered.

“If alacrity was the hallmark of the VP’s response to the first allegations, we would have to say that foot-dragging and temporizing appear to have set in to dissipate whatever sense of urgency developed after the latest revelations.”

It called on the administration to act and have the investigations conducted especially as it pushes a new anti-corruption framework.

“We were very impressed with the new thrust although we were concerned that there were no questions entertained. We were impressed because much was made of the role of some 14 laws enacted or updated since 2003 to combat corruption including the Audit Act No. 5 of 2004, the Procurement Act, Cap 73:05, (2003), the Access to Information Act, Anti-Money Laundering and countering the Financing of Terrorism (Amendment) Act No. 1 of 2015.

“Every day that passes with these Vice News reports dangling in the wind is a day in tension with Government’s stated anti-corruption aims.”

In the television program, a number of Chinese businessmen including a close friend of Jagdeo detailed various allegations of corruption in the Government and also alleged that Chinese investors would have to pay bribes to the Vice President to land Government contracts.

But Jagdeo has threaten to file a lawsuit following the allegations made by the businessman Su Zhi Rhong.

“He had said that VICE News lied on him and had issued a statement [to this effect]. Now that they have him on record as though he was doing this, that he claimed he was not doing, that means he has abused the access and friendship he had with me to rip people off.

“So I am going to take legal action against him, because he is damaging my reputation in doing [so] and also he will no longer, as I had said in the past when you had asked me about it, he will no longer be a tenant,” Jagdeo said.