Veron Primus, Who is Wanted in the US, Found Guilty of Murdering Real Estate Agent

KINGSTOWN, St. Vincent –A High Court judge Monday set September 21 as the date for the sentencing of a 35-year-old man, who was found guilty of murdering a 33 year-old real estate agent in November 2015. 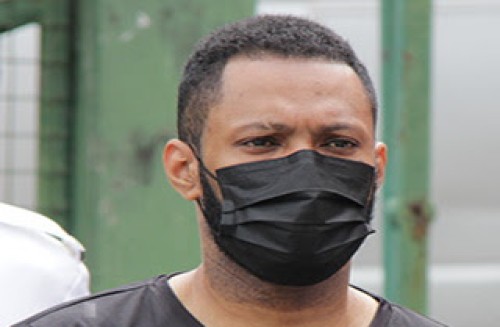 Vernon Primus leaving the court on July 11 (CMC Photo)A 12-member jury found Veron Primus, guilty of murdering Sharleen Greaves during the trial in which one of Primus’ adult female relatives, with whom he had a consensual sexual relationship, testified that he told her that he murdered the real estate agent.

The prosecution led by Karim Nelson told Justice Brian Cottle, who presided over the more than the month trial that prosecution would make every effort to be ready for mitigation ahead of sentencing.

Defence Counsel, Michael Wyllie, said he would he travelling on Saturday for medical attention and would not be able to mitigate before his return. He said this would depend on his diagnosis.

“Hopefully, I won’t need another surgery,” he added.

Primus is also wanted in the United States, having been indicted in June 2016 in connection with the 2006 murder of 16-year-old Chanel Petro-Nixon.

The court heard that the body of the real estate agent was found by her secretary, Ronella Bailey, in her office on November 13, 2015, less than 12 hours after a female, speaking in a hushed voice, telephoned the police general line, saying that someone had broken into her office at the building. The woman then began to scream and the telephone line went dead, as if someone had ended the call.

Detectives responded but found no sign of forced entry.

Primus, who was deported from the United States in June 2015, would not come to the attention of police until April 2016 when detectives,  investigating a report by Mewanah Hadaway, then 24 years old, that he had kept her against her will in his home from January 1 to April 15, 2016.

Charges were brought against Primus in connection with that allegation but they were withdrawn as Hadaway was not available to testify in a preliminary inquiry in 2017.

A total of 20 witnesses, 17 of whom were called by the Crown, testified in the trial, which began on June 14.