US to Send FBI and DHS Officials to Haiti

WASHINGTON,D.C. – The United States says that it will be sending senior Federal Bureau of Investigations (FBI) and Department of Homeland Security (DHS) officials to Haiti “as soon as possible” in the wake of Wednesday’s assassination of Haitian President Jovenel Moïse. 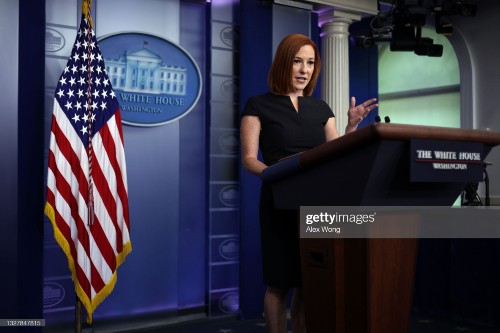 WASHINGTON, DC - JULY 09: White House Press Secretary Jen Psaki speaks during a daily briefing at the James Brady Press Briefing Room of the White House July 9, 2021 in Washington, DC. Psaki held a daily briefing to answer questions from members of the press. (Photo by Alex Wong/Getty Images)Moïse, 53, was killed in an attack by a group of assailants in his private residence in Petion-Ville, a suburb of Port-au-Prince, the Haitian capital.

Interim Prime Minister Claude Joseph said in a statement that Moïse’s wife, Martine Moïse, was also shot in the attack.

US White House Press Secretary Jen Psaki told a Press Briefing on Friday that the Joseph Biden administration “remains engaged and in close consultations with our Haitian and international partners to support the Haitian people in the aftermath of the assassination of the president.

“In response to the Haitian government’s request for security and investigative assistance, we will be sending senior FBI and DHS officials to Port-au-Prince as soon as possible to assess the situation and how we may be able to assist,” said Psaki, noting that, in January, the US announced a US$75.5 million for a wide range of issues, including democratic governance, health, education, agricultural development and strengthening of pre-election activities in the French-speaking Caribbean country.

“Strengthening Haiti’s law enforcement capacity is a key US priority — was before the assassination a few days ago, continues to be,” Psaki added.     “And the US Department of State’s Bureau of International Narcotics and Law Enforcement Affairs provides assistance directly to the Haitian National Police.”

In addition, the White House Press Secretary said the Biden administration is providing US$5 million to strengthen the Haitian National Police capacity to work with communities to resist gangs.

“I also wanted to remind you all that, earlier this year, the Department of Homeland Security re-designated Temporary Protected Status (TPS) for Haiti for 18 months — something the Secretary announced in May and something we are working to implement,” she said.

Psaki said Haiti is one of the countries that will be receiving vaccines from the United States.

“We will be prepared to deliver those, hopefully as early as next week,” she said. “Part of that is assessing what the airport — what can happen with the airport and how we will be able to deliver these,” she added.

Psaki said the investigation into President Jovenel Moïse’s assassination is being led by “Haitian police forces on the ground.”

Psaki said supporting law enforcement efforts on the ground in Haiti and making sure that the US is providing resources — in terms of women- and manpower, but also financial resources — are “part of what our objective is as well.”

Haitian officials said on Friday that they are also investigating whether the country’s security apparatus was complicit in coordinating the president’s assassination, with Moïse’s chief bodyguards expected to be questioned next week.

Meantime, Colombian officials have confirmed that 13 of the country’s former soldiers are among the assassination suspects.

Haitian authorities also said on Friday that 18 of at least 20 people detained to date in the assassination are Colombian nationals.

Two of the suspected assassins are as Haitian Americans, Haitian officials said. They said five other suspects are still at large.

“We are shocked and saddened to hear of the horrific assassination of President Jovenel Moïse and the attack on First Lady Martine Moïse of Haiti,” said President Biden in a White House statement earlier this week.

“We condemn this heinous act, and I am sending my sincere wishes for First Lady Moïse’s recovery,” he added. “The United States offers condolences to the people of Haiti, and we stand ready to assist as we continue to work for a safe and secure Haiti.”