Washington DC,  - United States Congresswoman Sheila Jackson Lee, has sought to allay the fears of over eight thousand DACA-eligible Caribbean immigrants that persons who have already applied for the Deferred Action for Childhood Arrivals (DACA) programme will not be affected by the recent the Texas Federal  Court ruling. 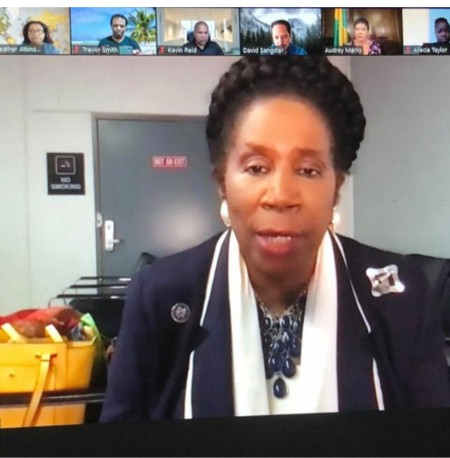 U.S. District Judge Andrew S. Hanen allowed the more than 600,000 young people already in the programme to keep their protected status.He prohibited the Department of Homeland Security from approving new applications, issued a permanent injunction vacating the memo that created DACA in 2012 — when President Biden was vice president — and remanded the issue to the U.S. Department of Homeland Security for reconsideration.

Congresswoman Jackson Lee, who was addressing an online town hall meeting hosted by Jamaica’s Ambassador to the US, Audrey Marks, on Thursday July 22rd , said that only new persons would be affected under the recent court ruling.

She said the Biden Administration would be appealing the ruling, and young Dreamers who have already applied would not be affected by the Texas Federal Court ruling.

“The DACA Programme is still in place, but the ruling has provided an obstacle as it relates to new applications, so if you have any of your residents that are in the DACA category, they are safe, renewals are safe, but the department of Justice is immediately going to appeal and to seek a stay of that decision” Congresswoman Jackson Lee told the Jamaican diaspora on-line audience.

In relation to the vaccines from the United States, she said the Biden Administration was working through logistical and legal matters to begin distributing vaccines to Jamaica and other CARICOM countries.

“The Caribbean is clearly our third border. We both depend on each other for our national security and, therefore, America, under the new leadership of President Joe Biden and Kamala Harris, sees the Caribbean as an extremely important part. We want the Caribbean and Jamaica to know that,” she assured.

The Congresswoman commended the measures implemented by the Government to contain the transmission of the coronavirus (COVID-19), pointing out that the protocols will aid in the country’s recovery.

“But it should not be unnoticed that even without the vaccines, the protocols put in place by Jamaica have been successful.  [The measures] put you in the wonderful posture to being able to open as it relates to tourists, and as far as I know, they were willingly following the protocols that you have established, because they feel comfortable,” she said.

“Jamaica is strong and is a leader and has its own assets that have allowed the economy to grow,” she said, noting that the US has taken note of the island’s “ability to withstand this terrible pandemic in an amazing way,” the Texas congressional representative said.

Representative Jackson Lee, whose parents are from Jamaica, is the Representative for Texas's 18th congressional district, which she has served since 1995. The district includes most of central Houston.