KINGSTON, Jamaica – UNICEF on Thursday expressed alarm at the upsurge in violence in Jamaica, particularly incidents with child victims, and called for an accelerated national response to address violence against children in the country. 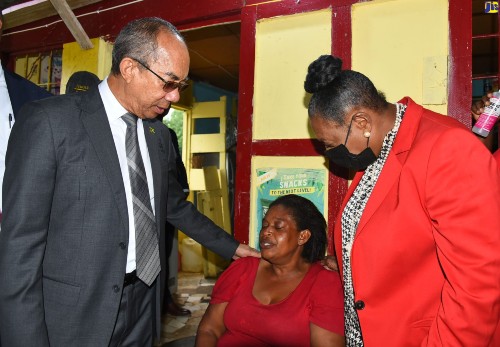 Deputy Prime Minister and National Security Minister, the Hon. Dr. Horace Chang (left) and Culture, Gender, Entertainment and Sport Minister, Hon. Olivia Grange (right) attempt to console bereaved mother and grandmother, Gwendolyn McKnight whose family was killed in the community of Chapelton, Clarendon in the early hours of Tuesday morning. (Photo credit: RUDRANATH FRASER via JIS)The United Nations children’s agency made the call in a statement issued on the heels of the slaying of Kemisha Wright and her four children in the central parish of Clarendon.

Wright and her three daughters – ages 15, 10, and 5 – and 23-month-old son were found with their throats slashed on Tuesday morning.

“This horrific and brutal attack against the most vulnerable members of our society has shocked the entire nation. It also highlights the need for the Government of Jamaica to accelerate commitments made to protect our children under the 2019 National Plan of Action for an Integrated Response to Children and Violence (NPACV),“ it said.

Those commitments include investing in programs addressing conflict resolution, anger management, safety in the homes and community safety, and developing and improving partnerships to strengthen community resilience in relation to violence.

“UNICEF is ready to continue our support to these efforts. UNICEF urges every member of society to take action to help protect our children from all forms of violence and abuse,” it added.

Police were on Wednesday questioning a 23-year-old man in connection with the deaths of 31-year-old Wright and her children.

Earlier, Prime Minister Andrew Holness, said that all resources necessary would be deployed to bring to justice the perpetrator involved in the killings, as he strongly condemned the “heinous and senseless act of violence”.