PARAMARIBO, Suriname – The appeal by former president Desi Bouterse and four others regarding their convictions for their roles in the execution of 15 political opponents in 1982, has been adjourned to August 17. 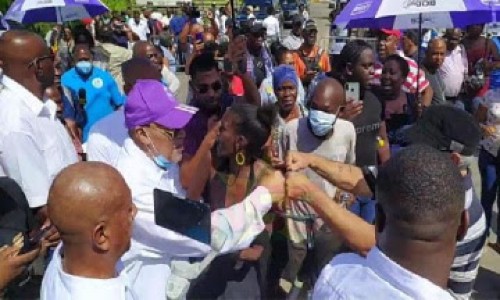 Former president, Desi Bouterse , in blue cap, is surrounded by supporters after leaving the Court on the first day of his appeal.Bouterse, 77, was sentenced to 20 years in Jail in December 2019 after he was found guilty of planning and ordering the extrajudicial execution of 15 political prisoners. The former president has previously denied the allegations.

He claimed the victims, who included lawyers, union leaders and journalists, were shot while trying to escape a colonial-era fortress in Paramaribo.

When the matter began before the Court of Justice, it was decided that witnesses will be heard at the next sitting of the court.

Bouterse, who led the Dutch-speaking CARICOM country during the 1980s as head of a military government and de facto leader, along with Benny Brondenstein, Iwan Dijksteel, Ernst Gefferie and Stephanus Dendoe – all of whom had received a lesser jail sentences – filed the appeal claiming that the Court Martial had failed to produce many exculpatory statements in connection with the verdict.

Attorney, Irvin Kanhai, who is representing all five men, said he intends to call three witnesses, including John Hardjoprajitno and Harvey Naarendorp who were acquitted during the trial.

Kanhai said that Naarendorp, a former foreign affairs minister, will testify as to whether or not there was an invasion during the military rule.

The Public Prosecution Service said it has no witnesses.

The December 8 criminal case was started in 2007 with 25 suspects. In the end, seven suspects were convicted, 12 were acquitted and six died during the trial.

In November 2019, the main suspect Bouterse was sentenced to 20 years in accordance with the request made by the Public Prosecution Service.

In 2012, the National Assembly passed an amnesty law granting Bouterse immunity, which was later invalidated by a court ruling.

He took office as president in 2010, following a democratic election and was elected for another term in 2015, but lost the 2020 election.