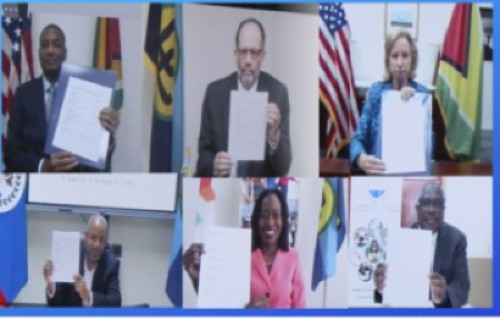 CARICOM Secretary general Irwin LaRocque (second from left) and delegates at USAID symposiumHe told a USAID Climate Change Symposium that the initiative incorporates plans for a climate-resilient, low-emission regional economy that generates sustainable jobs for people in the Caribbean.

LaRocque said climate and COVID-19 crises have demonstrated, “we are operating in times where the existential threats to our people and economies require multilateral and multi-sectoral approaches and cooperation”

He told the symposium that everyone is well aware of the fact that climate change and the pandemic, as separate occurrences, are devastating for CARICOM Small Island and Low-lying Coastal Developing States (SIDS).

In addition, he said, the region has had to deal with the recent eruption of the La Soufrière Volcano in St. Vincent and the Grenadines, stretching “our limited human and financial resources.

“This has been further exacerbated by the extreme weather that has caused extensive and destructive flooding in Guyana and Suriname. We also have to contend with a regular influx of sargassum seaweed to our coastlines,” LaRocque said, adding that “our regional disaster response mechanism has been called into action all year around with little or no respite before what is expected to be another very active hurricane season”.

LaRocque said that CARICOM has been at the frontline of the negotiations of the Paris Agreement and that the region has continued to lead by example, despite its low levels of greenhouse gas emissions.

“We have assessed and prioritized sectors for targeted intervention, not only to mitigate our emissions, but more importantly to scale up adaptation strategies. These are necessary to confront the impacts of climate change that are already affecting us,” he said, adding this has been done at the regional level, based on the ambition of member states as they revised and submitted their Nationally Determined Contributions.

“Adaptation and resilience remain a priority for us given the levels of impact during the past 10 years.  In that time, the Caribbean has been affected by 40 tropical cyclones of which 12 attained hurricane strength. Eight were classified as major hurricanes which resulted in loss of life and property, flooding, landslides, damage to infrastructure and housing, and dislocation.

“Six Caribbean States are ranked in the top ten most disaster-prone countries in the world and all are in the top 50.  Disasters cost the region at least two per cent of its Gross Domestic Product (GDP) every year.  In addition, several of our economic sectors continue to remain under threat from slow-onset climate impacts.”

LaRocque said that declining rainfall and saltwater intrusion due to sea level rise compromise the region’s water resources, requiring significant investments to ensure a safe water supply.  He said this, together with higher temperatures, pests and more extreme events are reducing agriculture yields in the Caribbean, and causing more crop loss, impacting the Region’s food security.

“Sea level rise also causes many of our member states to experience beach erosion, flooding, intense coral bleaching episodes, and increased impacts of ocean and coastal acidification.  Mangroves and sea grass meadows are also being degraded.  The overall impact on coastal ecosystems results in damage to the fishing and tourism industries, key drivers of Caribbean economies and food security.

“As it relates to mitigation, while the region’s use of renewable energy has more than doubled in the past 10 years, it is far from optimal. Continued and accelerated transition to renewable energy for both economic and environmental reasons remain a priority for us,” LaRocque said, noting that “added to this, the development of policies to make transport systems more energy efficient, including improving access to e-mobility options, will require scaling up in the short to medium-term.

“Our goal is to make the region climate resilient. But building resilience is very costly, in particular given the range of physical infrastructure that it involves,” he said, noting however that an International Monetary Fund (IMF) study found that for every dollar spent in building resilience, savings can be as much as seven dollars in damage and reconstruction costs after a disaster.

“This is why there is an urgent need for small vulnerable states like ours, whether low, middle or upper income, to have access to concessional development financing in order to achieve resilience prior to a disaster and not wait until after it strikes.

“It is, therefore, crucial that vulnerability be the main criterion in determining access to concessional development financing which we urgently need in our quest for resilience.”

The CARICOM Secretary General said that the region requires financing to address short, medium and long-term responses to tackle climate change and recover from the global COVID-19 pandemic, while continuing to build our resilience.

He said this would help SIDS through increased liquidity, reduced debt levels, greater fiscal space, access to new financial instruments and recovery packages that are compliant with the Paris Agreement.

“We also recognize that the generation of timely and accurate data remains a challenge for the development of environmental strategies and policies at the national, sub-regional and regional levels.”

LaRocque said that while the region has “excellently performing regional institutions” including the Belize-based Caribbean Community Climate Change Centre (5Cs), the Barbados-based Caribbean Institute for Meteorology and Hydrology (CIMH), the Trinidad-based Caribbean Agricultural Research and Development Institute (CARDI) and  the Caribbean Public Health Agency (CARPHA), as well as the  Caribbean Disaster Emergency Management Agency (CDEMA), “our weakness remains in scaling up the mechanisms needed to ensure that data generated are incorporated and used to advance climate resilience and adaptation”.

He said this would facilitate the submission of projects to the Green Climate Fund (GCF) and Adaptation Fund (AF).

LaRocque said he is hoping that the key messages and action points from these symposia will be documented, and serve as points of departure for confronting the challenge of climate change.