HAMILTON, Bermuda — A campaign group has welcomed an assurance from Home Affairs Minister Walter Roban that same-sex couples who married before a landmark Privy Council judgment will have their nuptials remain valid if legislation tabled in the House of Assembly on Friday is passed. 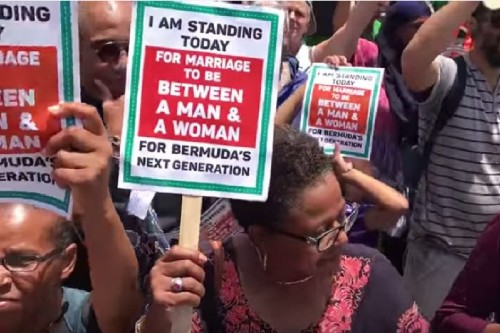 Roban, who is also Deputy Premier, said the Domestic Partnership Amendment Act 2022 would extend a transitional period in light of the ruling handed down by the island’s highest court of appeal in London in March.

The Privy Council, the island’s highest court, in a majority 4-1 ruling, said that the Domestic Partnership Act (DPA), which confined marriage to between a man and a woman, was not unconstitutional.

The ruling gave the Bermuda government the green light to ban future same-sex marriages in this British Overseas Territory. It is understood that by mid-March, there had been 33 same-sex marriages on the island since 2017 and 10 on Bermuda-registered ships.

“The uncertainty over the validity and recognition of same-sex marriages potentially has widespread negative effect on the rights previously enjoyed by the couples involved who were married lawfully under the law as it existed at the time and who may suffer the loss or interruption of certain rights and benefits,” Roban told legislators.

“It is therefore not tenable to leave the act as it is without making the appropriate amendments,” he said, adding “Section 53 of the principal act provides that a marriage is void unless the parties are respectively male and female.”

Legislators heard that the transitional period was from May 5, 2017, when a Supreme Court decision paved the way for same-sex marriage, until immediately before the commencement date of the DPA on June 1, 2018.

Roban said that on June 6, 2018, then Chief Justice Ian Kawaley ruled in the Supreme Court that section 53 of the act was unconstitutional, but his judgment was stayed pending appeal.

But Roban added that on March 14, 2022, the Privy Council overturned the decision of the Court of Appeal and determined that section 53 was not unconstitutional.

After the legislation was tabled, the LGBTQ (lesbian, gay, bisexual, transgender, queer/questioning) campaign group OutBermuda said “while we wish that Bermuda was in a different place with equal marriage for all, we are grateful that those married couples that have been in limbo these past three months have certainty on the validity of their marriages under the law.”

Shadow Minister of Legal Affairs Scott Pearman said the opposition One Bermuda Alliance was pleased to see the government confirming the legal status of same-sex couples whose marriages were “left in limbo” by the Privy Council decision.

Pearman said the move announced in parliament on Friday “will no doubt bring relief “to the couples affected.

“It would be unconscionable for any existing, valid marriage to be voided. It is right that the legal position is now being confirmed by the government for all those who observed the law of the land as it stood at the relevant time.

“It is regrettable that people will have experienced anxiety over an issue so important to their lives. This new law should give all necessary assurances.”

The bill tabled on Friday is likely to be debated in the Parliament at the start of next month.

The original Supreme Court decision in 2017 came in a judgment by Puisne Judge Charles-Etta Simmons after Bermudian Winston Godwin and Greg DeRoche, his Canadian partner, litigated against the Registrar-General for refusing to post their wedding banns.

Despite their landmark victory, Godwin and DeRoche chose to marry in Canada.

Bermudian lawyer Julia Saltus and her Ghanaian-American partner Judith Aidoo were the first gay couple to wed in Bermuda.